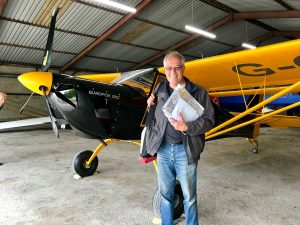 As the long hot summer of 2018 fades to a wonderful memory, we can reflect on matters that enable us to enjoy those high cloud bases, unlimited visibilities, thermals and wave. Our tug fleet at Sutton Bank continues to develop and between July and November YGC and Borders GC at Millfield were given the opportunity to fully utilise the 120 hp EuroFox demonstrator in our respective operating environments.  We also demonstrated the tug during the ‘2018 heatwave’, which proved the need for further development of the engine induction system.

EuroFox UK marketed the glider tug EuroFox as being capable of towing 80% of the glider fleet at 20% the cost of the legacy tugs that have been used for decades. This remains very much the case for the 100 hp Rotax powered EuroFox aircraft, but the advent of more powerful Rotax variants has enabled development of a EuroFox tug capable of launching all but the heaviest sailplanes, with performance similar to 180 hp Cubs and 235 hp Pawnees.

We have now operated with the EuroFox at Sutton Bank for 6 years. The 100 hp engines (Rotax 912ULS and 912iS) have safely launched over 12,000 gliders during 2300 hours of engine running time, with the 912iS logging well over 300 hours per year.  The good serviceability of the aircraft, under the LAA engineering regime, has been remarkable, and the tug pilots love the comfort and excellent handling.

EuroFox 120 G-CKAB retains the fine handling characteristics of her predecessors, but the Edge Performance engine transforms her tugging performance from satisfactory to excellent compared with the Rotax 912iS. The EP engine is an uprated Rotax 912ULS with the carburettors replaced by the Edge Performance Electronic Fuel Injection (EFI), welded and balanced crankshaft, with big-bore cylinders and pistons giving increased capacity along with other upgrades.  The engine was originally developed for the gyroplane market, and its most powerful variant (with a turbo) pushes out 160 hp.  The engine retains the original Rotax ‘soft-start’ so the gearbox damaging ‘bad starts’ that are so easily induced in the 912iS are completely avoided.

An extra air intake has been installed just in front of the windshield that feeds cold air through a large filter to the throttle body. The EP engine now produces almost all of the 120hp for the whole tow as the ECU is re-mapped post installation to run lower EGT’s.

The second phase of ‘gliding club’ flying at Millfield and Sutton Bank comprised nearly 100 hours flying to prove the modified engine installation and set-up. 2 Pawnees, a 100 hp EuroFox and a Super Cub sat under-utilised in YGC’s tug hangar for a month while Kabby did the aerotowing business superbly.  In early November we reluctantly handed her back to Roger Cornwell when he delivered a 120 hp EuroFox kit to the Wolds GC at Pocklington.  We flew G-CKAB at Sutton Bank for 120 hours launching over 600 gliders in total, and in one day alone we did 47 tows in 8 hours flying.

G CKAB has now completed 900 tows and 260 hrs, some of which were repositioning flights, and EuroFox Aviation tell me that there are 8 other 120hp EuroFoxes operating, in build or on order. Some of these are original 100hp EuroFox (about 25 in the country to date) that are having the 120 engine fitted.

The EuroFox 120 takes glider towing further into the 21st century and we hope to upgrade our EuroFox to the 120 EP engine once demand stops outstripping supply from EP in Norway.  Happy Christmas Everyone