Thursday 7th.  The Azores high started to make its presence felt with a light to moderate NW'ly that slowly backed into the W, convection being quite broken and tending to go blue. leading to some difficulties for those on cross countries.  Chris Teagle in his Kestrel 19 did an O/R to Pocklington, being stuck over the TP for a while trying to get enough of a climb to start the return journey.   Rob Bailey in his ASG29t flew 341 km with TPs at Horncastle and Grantham, initially struggling to start the task, Rob only occasionally climbed above 3,500' asl until rounding Grantham when climbs improved to 4,500' asl, before reducing again on when passing York  on  the way home.  John Ellis in his DG800 also visited Grantham, surviving a low point below 1,000' asl near Stamford Bridge on the way out and another one NE of York on the return leg than led to deployment of his engine.  Les Rayment in  his DG800 also flew into Lincolnshire turning back when near Kirton in Lindsey as he struggled to get a climb, and also later to get onto his final glide.  Paul Whitehead, flying his ASW24, abandoned his planned 300 km task and instead flew to Doncaster NW and Catterick, some 200 km, while Bill Payton, flying his DG1000t solo, visited Pateley Bridge, Grassington and Kirkby Stephen after taking a while to set off  from Sutton.  All the other 5 private owners who flew remained relatively local, but contributed to the 10 flights of over an hour.  Among the pilots having flights of between 30 and 60 minutes were Keith Davey with 53 minutes solo in K21 JVZ and visitors Mike Birch/Stuart Morris from Husbands Bosworth who had 50 minutes also in JVZ off the second flight of the day.

Friday 8th. The high increasingly dominated the UK weather, with Cu blossoming late and then tending to disappear.  Those pilots going cross country struggled at times with most having at least 1 low point to contend with.  Steve Thompson was  the first off in his Ventus 2t, completing a 401 km task with TPs at Saltby, Darlton and Grantham finding good conditions for most of the task except for the last 60 km as it turned blue.  Similar conditions were experienced by Rob Bailey in his ASG29t who flew a 352 km task with TPs at Tontine, Horncastle and Tontine, while Kelly Teagle flew the DG1000 with Tim Milner acting as adjudicator on a task with TPs at Beverley. Kirton in Lindsey, Pickering and Burn.  Deteriorating conditions north of the Humber led to the task being abandoned on the leg to Burn, the return to Sutton being a struggle, but 249 km being flown.  Albert Newbery and Stuart Heaton flew their DG1000t around Burn and North Duffield surviving a couple  of low points, while John Ellis in  his DG800 visited Burton on Stather and the Tontine, 180 km, having to persist with a weak thermal over Elvington that drifted him over Pocklington before finding a good climb that enabled him to continue the task. Nigel Burke in his DG800 did an O/R to Beverley finding the going tough on the return leg as he strugled to get above 3,000' asl, while Chris Booker in his LS1 turned back just short of Rufforth before visiting the Tontine.  Toby Wilson in his Standard Cirrus visited York East and Tontine, while Clive Swain took his Kestrel 19 to NW of Ripon and the Tontine in his flight of just over 5 hours.  Best climbs were typically to around 4.5 to 5,000' asl with the best average climb rate around 3.5 to 4 kts although Toby Wilson found a 5,8 kt one.  This was one of 19 flights to exceed an hour, with Chris Knapp, 1:17 in Astir FSH, Dave Thompson, 1:52 in Astir DPO and Keith Davey, 1:00 in Astir DSU joining in the fun.  The day's light to moderate W'ly meant operations off runway 24 with 37 ATs flown with 5 of  these for First Flight pupils.

Saturday 9th.  The high was now centred over the UK so light winds blew predominately from the WSW , Cumulus only blossoming around midday over the Moors, Wolds and Pennines and then tending to remain blue locally.  Initially, cloud base was under 4,000' asl but improved later, with Rob Bailey in his ASG29t climbing to 5,500' asl as he flew a 341 km task with TPs at Horncastle and Grantham under mainly blue conditions but with the occasional strong thermal of around 4 kts average.  Darren Lodge in his LS8-18 attempted a 205 km task around a double O/R to Burn, but with Cumulus disappearing, abandoned the task during the second leg to Burn and flew 115 km before soaring locally.  Nigel Burke in his DG800 flew an O/R to Pocklington spending most of the time between 3/4,000' asl, while John Ellis in his DG800 flew to Burton on Stather on the other side of the Humber before returning north to Ripon where he had to resort to his engine having descended to around 1,000' asl.  Chris Booker in his LS1 flew the local 100 km triangle visiting Pocklington and Rufforth climbing to 4,300' asl over Rufforth, high enough for a final  glide back to site. All of the other 9 private owners who flew remained local, contributing to the 21 flights out of the 33 on the day to exceed 30 minutes, 19 of these being over an hour.  The latter included Bruce Grain/Dave Thompson in the DG1000 who had 1:20 and  Toby Wilson and Mark Walton with 1:08 late in the day in K21 FYF.  More significantly, Tomer Altman in Astir DPO and Adam Sayer in Astir DSU both completed their Silver C durations, so congratulations to them.   A photo of Tomer and Adam is shown below as they ring the bell in the clubhouse bar, the other photo showing all three of the Astirs which, together with the DG303, now constitute the YGC club single seat fleet. 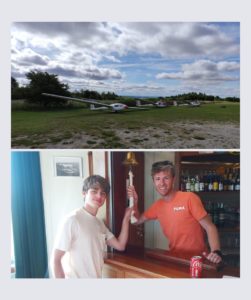 Sunday 10th.  Light winds from the WSW led to operations off runway 24 with most landings on 20.  29 ATs were flown, 11 by private owners, as a number of cross countries were flown and flights exceeding 30 minutes numbered 18. with 15 over an hour.  Cloud base had increased compared to Saturday with pilots climbing to around 5,300' asl, although Fred Brown in his Ventus ct and visitor Gary Lewis in his Ventus 2cxt  both climbed to over 6,000' asl.  Fred flew 147 km around Harrogate North, Rufforth and Catterick while Gary visited York, Knaresborough and approached Ripon to cover 103 km.   Les Rayment in his DG800 flew the Pocklington/Rufforth 100 km triangle while Rob Bailey in his ASG29t flew a 204 km task with TPs at Wetherby, Grimwith Reservoir, Burn and Wetherby, reporting tricky conditions in the Dales but superb ones in the Vale of York. Sarah Stubbs in Astir FSH ventured north to just ESE of Northallerton and south to Husthwaite, while  Julian Gerretson flew Astir DSU to Helmsley and Thirsk.  A Rufforth pilot in an Elfes 4 landed out at site before later taking an AT and, with the help of a single thermal, landing back at Rufforth.  Colin Troise, 1:48 solo in the DG1000, Rod Brister, 1:30 in Astir DPO, Adam Sayer, 1:32 in Astir FSH and Toby Wilson/Teo Cano Meerachs, with exactly an hour in K21 KLW also made good use of the soaring conditions.