Wednesday 13th.  The wind direction and strength were WSW and light to moderate/moderate and although the wind was not strong enough to allow winching, it did provide hill lift and, with the assistance of some thermal activity, generated 2 flights of over an hour and 4 more of over 30 minutes, although the start of flying was delayed until around 1315 hrs by low cloud. In spite of the delayed start 16 launches were the day's total.  Guy Hartland/Steve Ogden in the DG500 and Andrew Wilmott in  his ASW19 were the >1 hr pilots, mainly using the main bowl for lift, although Guy and Steve did venture up the main ridge to Boltby, generally maintaining 6-700' QFE. Another flight to venture to Boltby was that of Bruce Grain/Amelia Forrester in K21 JVZ, as did Guy Hartland/Ivan Maczka in K21 KLW, also finding a 2kt thermal that took them to 2,500' asl. Later in the day, a number of pilots took 3,000'+ asl tows to the west, finding weak wave lift that although not allowing much in way of climbs, did allow altitude to be maintained for a while.  Thus, Clive Swain/Freddie Vaux in JVZ  towed to 3,500' asl over Dalton and maintained that altitude for 10 minutes before returning to the main bowl and soaring there for a while in their flight of 53 minutes, while  Dave McKinney/Ian Pickering climbed from 3,500' to 3,900' asl over RAF Topcliffe  before beginning a slow descent that brought them back on the ground after 34 minutes.  Amelia Forrester, after having 2 P2 flights earlier in the day, took the last flight of the day as P1 as she soloed in KLW, the occasion of her successful flight being recorded for posterity as shown below, so well done Amelia. 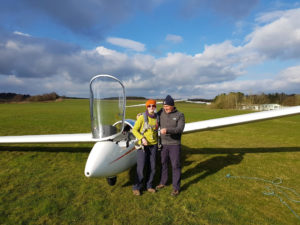 Thursday 14th.   With high pressure over Scandinavia and low pressure over the Atlantic, a light ESE'ly blew, this becoming a light to moderate SSW'ly later in the day, the temperature climbing to 18.7C.  The day was generally sunny with thermal activity, albeit weak, although convergences to the north of the site and west over the eastern edge of the Pennines provided some stronger lift.  27 ATs off runway 20 were flown, generating 3 flights of >1 hr and and additional 4 of more than 30 minutes.  Local cloud base was around 4-4,500' asl but up to around 5,000' asl under the convergences, with average thermal strengths of around an knot, with occasional stronger climbs of up to 4.3 kts.  Only 2 pilots ventured far from site, with Rob Bailey in his ASG29t flying a 200 km task around Ripon/Aysgarth/York and the Tontine that took him just over 3 hours from take off to landing.  Dave Thompson in the DG303 visited Helmsley and Thirsk before flying north to a point some 6 km NE of Northallerton before returning to site in his flight of 2:30. The other pilot to fly for just over an hour was Julian Pratt, solo in K21 JVZ for 1:05, a flight included a climb to 4,200' asl and more importantly was his first solo glider flight, so congratulations to Julian. Julian was not, however, the only first solo pilot of the day, as on the penultimate flight, Paul Leake also soloed in JVZ so congratulations are again due. Photos of the day's soloists are shown below with Julian with Fred Brown on the left and Paul with Guy Hartland on the right. 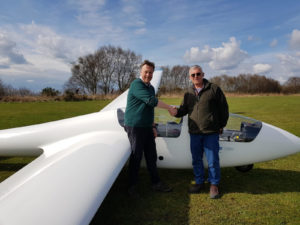 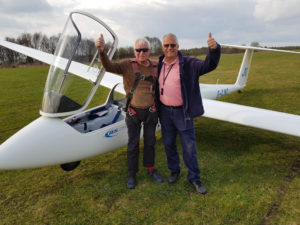 Friday 15th.  A continuation of the light to moderate ESE'ly flow meant operations were again off runway 20, initially behind the Eurofox until a broken weak link meant a change to the Pawnee. 24 launches were the day's total but a bright start was soon followed by the ingress of a medium level overcast that supressed convection and when this did eventually disappear it was replaced by a extensive stratocumulus layer with weak thermal activity. Only 1 flight exceeded an hour, Rob Bailey in his ASG29t managing 1:52 as he visited local TPs.  Rob's best climb was 2.6 kts, and his best altitude 3.900' asl, but generally thermals were weak, with some triggering of thermal activity from the into wind and into sun slopes of the southern ridge.  The only other private owner to fly was Duncan Pask in his LS10t, his flight of 47 minutes aided by his engine, while pure glider pilots, visitors P Morgan and J Ninx? had 41 minutes in their Janus and Martin Newbery had 38 minutes in the Discus.  The day also saw Amelia Forrester have her second solo flight in K21 JVZ, while Dad John, did some spinning exercises in the DG1000 with Fred Brown as he worked towards his own first solo flight.