Wednesday 12th.  A light, mainly SSW'ly blew, but around lunch time take offs from runway 24 became turbulent, so a halt was called to proceedings this lasting around an hour before launches restarted.  In all 19 launches were flown, mainly in the club 2 seaters as the visiting Cambridge GC pilots and YGC club members took advantage of another pleasant if unspectacular day's flying.  Single seater flights were limited to John Ellis's 19 minutes in the DG303 and two flights by visitor David Jokinen in his DG300.  They should have been joined by Charlie Brooker in his ASW19, but his morning and afternoon attempts to launch all led to early releases due to wing drops on take off.  The conditions, although pleasant were not conducive to soaring with only 1 flight reaching 30 minutes, this being Graham Evison and Steve Hunt in the DG1000.  5 other flights managed to creep over 20 minutes, the best of  these being 25 minutes by Albert Newbery and Bill Payton in the DG1000, with Laurie Clark managing to give the day's two First Flight pupils the requisite 20 minute flight.  Although the flying wasn't spectacular the evening skyscape made up for it as the following photo from Arthur Docherty shows. 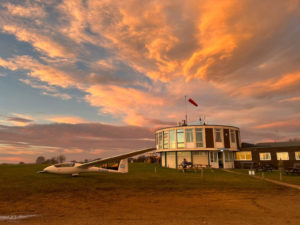 Thursday 13th.  The high pressure centered over the UK gave a light SSW to WNW wind and sunny, blue sky day at Sutton.  Wind strength was insufficient for the main ridge to work but several pilots found transient patches of wave lift with climb rates typically 1-2 kts, although peak rates of 5 kts were encountered.  The available lift produced some climbs of up to 1,000' but did not result in any flights exceeding an hour, but 3 flights reached 40-42 minutes  with a further 3 flights of 30-37 minutes.  The flights of 40 - 42 minutes were by Guy Harland and Rod Brister, 42 minutes in K21 JVZ off the first flight of the day, 41 minutes by visitor Charlie Brooker in his ASW19 and 40 minutes by Colin Troise solo in the DG500, the latter time aided by a tow to 4,000' QFE over Dalton. Apart from the tantalising  areas of wave, the day was also notable for visitor Koji Shukawa's first solo AT and first solo at Sutton Bank and Adrian Bennet's coversion to the DG303 so congratulations to them.  The writer assumes that Koji was pleased with his achievement but is in no doubt that Adrian was pleased with his as the following selfie shows. 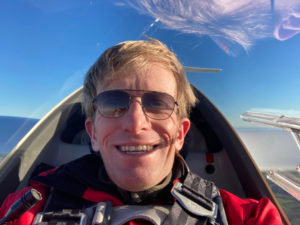