Thursday 6th.  A moderate SSE'ly brought in a copious amounts of cloud and from midday rain, so flying was restricted to the morning with 2 flights in the Falke.

Friday 7th.  Atlantic frontal systems brought a snow to the site in the early hours of Friday, but not sufficient to prevent flying which commenced around 1100 hrs off runway 24.  The W'ly wind, initially light to moderate strengthened a little by midday, allowing winching to become the launch method, ATing being employed during the morning with 4 launches to add to the 7 by the winch.  Both launch methods produced one flight of over an hour and 2 of between 30 and 60 minutes.  Those from AT launches were Dave Thompson who  had 1:40 in the DG303, with Rob Bailey and S Bailey having 36 minutes in the DG1000 and, off the last AT of the day, Guy Hartland and Paul Bulmer had 55 minutes in K21 JVZ.  The analogous flights off the subsequent winch launches saw Tony Drury have 1:11 in the DG303, with Dave Watson and John Carter having 39 minutes in the DG1000 while Guy Hartland and Nigel Burke had 49 minutes in K21 KLW.  Some picturesque photos and a video of  operations off a snow covered Sutton Bank are given below courtesy of Tony Drury, Dave Thompson and Dave Watson. 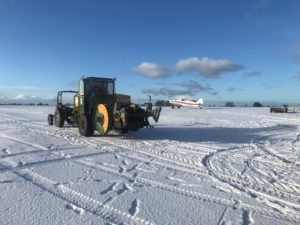 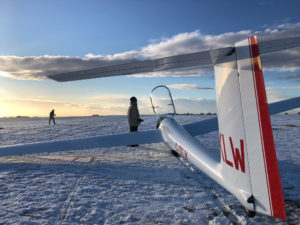 Saturday 8th.  Low cloud and rain brought in on a moderate SE'ly started around 0500 hrs and lasted until around 1400 hrs, the wind then becoming a light to moderate W'ly.  However, the conditions never became suitable for flying.