Monday 10th.  An Atlantic weather front brought a moist, light to moderate SSE'ly flow with a lot a cloud, the latter delaying the start of flying until mid afternoon and restricting it thereafter to 4 launches to between 1100' and 1500' QFE.  All the launches were for members of the visiting group from the Cambridge GC, with Cambridge instructor Andrew Watson and YGC instructor Dick Cole sharing the P1 duties.  With no lift and low launches, flight times didn't exceed 9 minutes.

Tuesday 11th.  The residual high cloud from Monday's front was still covering the sky at the start of flying and displaying patches of Virga, but slowly slipped away to the south, with blue sky arriving early afternoon, as a light NNW'ly blew.  Operations off runway 02 commenced around 1030 hrs and continued unabated until the last flight landed around 1630 hrs, with the sun having set at 1608 hrs.  Guy Hartland provided the following photo from his flight with Duncan Pask just before the sun set. 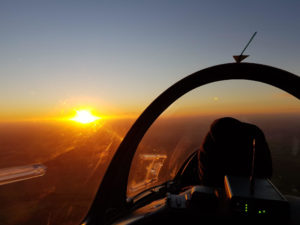 The day's activity resulted in 31 launches mainly behind the Eurofox before a flat tyre saw Pawnee TM take over.  Conditions aloft were silky smooth, with only the occasional little burble, so flight times were strongly related to launch height with Chris Thirkell/Duncan Pask's 3,000' tow resulting in their 23 minutes being the longest of the day.  The Cambridge visitors operated K21 KLW throughout the day contributing 9 of the day's launches, with their privately owned DG300 and ASW19 5 more.  From a YGC standpoint, George Rowden and John Ellis did some spin and other checks in the DG500 with Guy Hartland while Dave McKinney and Laurie Clark did some instructor training with Derek Smith in K21 JVZ.  Congratulations are due to John Dore who successfully converted to flying the DG500 solo and to Roger Taylor who re soloed in a glider some 57 years after his initial solo flight.  Les Rayment, Fred Brown and Nigel Burke unselfishly denied themselves the pleasure of flying and instead put their road mending talents to use on the approach road to the club, as the following photo shows. 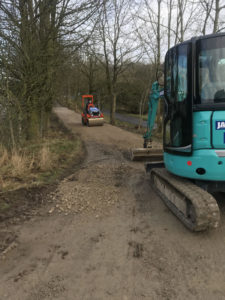