Friday 14th.  Blue, sunny skies again prevailed as a light S'ly blew, operations of runway 20 commencing around 1030 hrs. Although the majority of landings were on 20, the light winds led to pilots landing on 24, 02 and 06, the last a hangar flight at the end of the day.  25 launches were the day's total, the majority for the visitors from the Cambridge GC who, as well as flying YGC gliders, also contributed 7 launches in the DG300 and ASW19 they had  brought with them.   The change in wind direction meant no repeat of Thursday's transient wave, so flight times were low and related to launch height, Tony Drury's 22 minutes solo in the DG500 off a 2500' tow being the best of the day,  with Duncan Pask's 20 minutes solo in the same glider being next best.  Solos in the DG500 were popular, with Charles Frecheville having 3 and visitor Koji Shukawa 1, this being a first in a DG500, so well done Koji.  It was a day for first solos at Sutton for visitors Teddy Ong and  Brooke MA in K21 KLW, so well done to them on all in all a successful day at the end of a successful week of flying  for the Cambridge GC group even though they didn't get to experience any hill soaring.  While most people coming to site were intent on ascending some were more keen on descending as the following photos show. 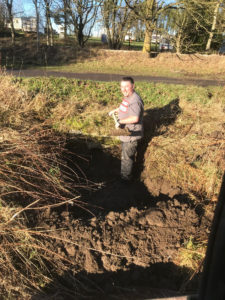 Saturday 15th.  After the clear blue, sunny skies of the last few days, Saturday was cold and foggy all day, with the temperature at nearby RAF Topcliffe never  getting above freezing.  The conditions meant there was no flying.