Wednesday 15th.  Steve Thompson's 2 recent lectures on wave,  how it is generated, how to spot a good wave day, and how to find, climb and use the wave were put to the test as a light to moderate WSW/W'ly formed good low level lenticulars allowing 9 of the day's 11 ATs off runway 24 to climb above 5,000'.  In addition, a number of cross countries were flown.  Tomasz Rusin and Kryztof took the DG500 on a 2:41 flight around Pately Bridge and Barnard Castle, 148 km, climbing to a peak altitude of around 10,700' asl en route. Tomasz reported much stronger wave conditions further west, the better conditions commencing around Ripon.  Steve Thompson, flying the Discus, covered 145 km with TPs at Thirsk, Ripon, Barnard Castle and Ripon in a flight lasting around 3 hrs, with a peak altitude of around 10,100' asl, and provided the following photo. 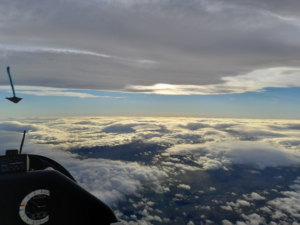 Steve was not the only photographer, with John Carter taking the following photos when flying with Dave McKinney in the DG1000, their climb peaking at just under 6,000' asl as they visited the Tontine, Boroughbridge and Linton 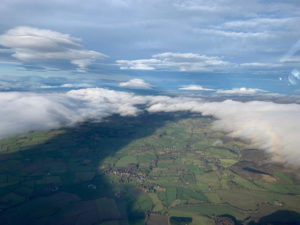 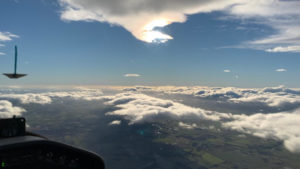 Polly Whitehead provided the following photo of a wave bar that extended into the Durham Teesside zone that husband Paul had flown solo in the Falke after switching off the engine over Bagby.  Paul then repeated the exercise with Polly later in the day. getting to 6,600' on the first flight and 5,300' on the second.  Another pilot to get to over 10,000' asl was Ron Beezer who climbed in the DG303 to around 10,400' asl  and visited Northallerton and Rufforth.