Thursday 16th.  With an strong anticyclone centered over the UK,  a light SE'ly flow, blue skies and unbroken sunshine prevailed at site, although a layer of stratus could be seen to the west.  Flying got underway around 1030 hrs, with 17 ATs off runway completed before the last flight landed at around 1600 hrs, K21 KLW and the DG500 providing the means to fly.  11 dual and 6 solo flights resulted, the former including 2 for First Flight pupils, the quiescent conditions meaning flight times were a function of tow height, the latter ranging from 500 to 3,000' QFE and the former from 2 to 27 minutes.   The 27 minutes was flown by Clive Swain, solo in the DG500, with Dave Watson and R Selfe having 25 minutes in K21 KLW and Andrew Bedford having 24 minutes solo in the same glider.  The clear sunny skies and good visibility were enjoyed by all, the essence of the day being captured by the following photos. 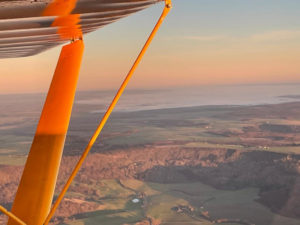 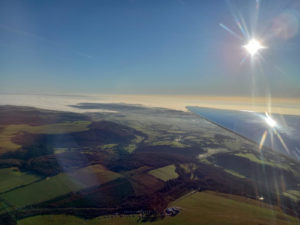 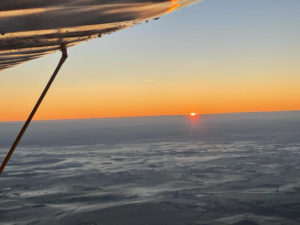 Friday 17th.  Sunny skies and light winds again prevailed, but only for a portion of the day, as low cloud spread in by early afternoon stopping flying.  Before that, however, 7 ATs and 4 Falke flights had operated off runway 20 and as on  Thursday, a variety of launch heights led to a variety of flight times in the absence of any lift.  4 to 20 minutes was the flight time range, with Guy Hartland and Tom Dale providing both 20 minute flights in the DG500 as Tom did some instructor training.  John Dore had the only solo flight of the day with 8 minutes of a 1,000' tow in K21 KLW.