Friday 3rd.  A light to moderate WSW'ly blew bringing in increasing amounts of cloud with the start of flying delayed until midday.  Thereafter, 8 ATs were flown off runway 24 with the majority of landings on the same runway, although 2 pilots preferred runway 20.  Chris Handzlik took the 1st AT in his DG300, finding some soft hill and weak wave lift that  didn't allow him to exceed his launch height, but did allow excursions west to the East Coast Main Line.  Chris's 48 minutes was the longest flight of the day with Dave Thompson's 45 minutes in the Astir the next best, Dave similarly getting  to the East Coast Main Line.  Chris and Dave's flights were the only ones to exceed 30 minutes with only 2 other flights  exceeding 20 minutes, Nigel Burke and Les Rayment having 25 minutes in K21 JVZ and John Marsh and Tony Drury having 21 minutes in the same glider.

Saturday 4th.  A light to moderate to moderate SW'ly that progressively veered into the NW was accompanied by a low overcast that restricted launch heights and correspondingly, glider flights.  Only 2 pure glider flights were flown, with Kelly Teagle  and Guy Hartland having 15 minutes each as P1, the P2's identify being indecipherable from the log sheet.  The low cloud base did not deter those flying the Falke, which had 4 sorties, one of which was for a First Flight pupil and another a shared flight by Jamie Quartermaine and Sarah Stubbs.

Sunday 5th.  A moderate to fresh NW'ly ensured that there was no flying, as did the patchy rain.  The following photo in the aftermath of Storm Arwen was provided by Tony Drury, with the invitation to provide a caption. 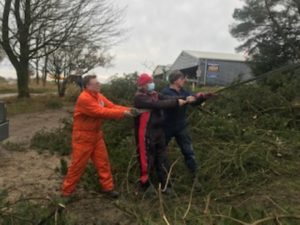 My suggestion is "I TOLD you there was an elephant in the room".

Monday 6th.  An weak occluded front crossed  the UK during Monday, its low overcast, bits and pieces of rain ruling out any flying, the wind being  moderate to fresh before slowly declining to become light with the direction varying between SSE and SSW.  Although there was no flying, indoors, Guy Hartland, Polly Whitehead, Marian Stanley and Lindsey Grain, took part in a Christmas wreath making class under the expert guidance of Dawn Hartland.   With Prosecco, hot drinks and festive nibbles to hand a fun afternoon was had by all and the end results were definitely worth the effort, as the following photo shows. 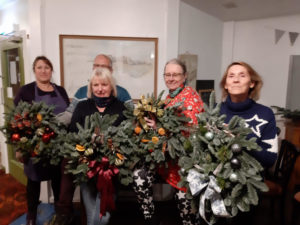 Tuesday 7th.  Approaching Storm Barra, brought strong winds, low cloud and wintry precipitation to site, the SE'ly wind increasing to fresh to strong by the middle of the afternoon with gusts into the mid 40 kts recorded at RAF Topcliffe. Glider flying was  out of the question while taking off without a glider was an option.