Thursday 18th  A moderate W'ly ushered in a day of hill and wave soaring, the latter being fairly weak, while launches were mainly by winch but included a couple of ATs.  The first of these saw Steve Thompson and Andrew Bedford launch in the DG1000 with the declared intent to fly the club's 200 km wave task.  However, having reached Aldborough St John to the SW of Darlington and the wave not going much above 6,000' asl, the higher elevation of the upwind lenticular proved to be too much of a barrier and the task was abandoned.  Durham Teesvalley did all they could to assist by allowing Steve and Andrew to slowly recover from a low point within their airspace.  Steve and Andrew's peak altitude of 6,100 asl proved to be the best of the day, with the next best being John Carter's 3,700' in the DG303 and Fred Brown's 3.400' in his Ventus, Fred taking the other AT of the day.  John provided the following pictures of the wave, which produced some low cloud over the site. 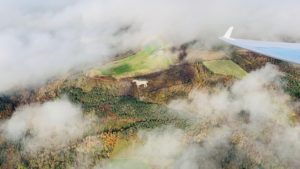 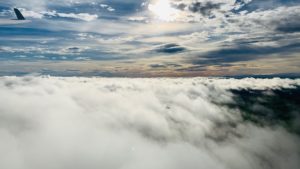 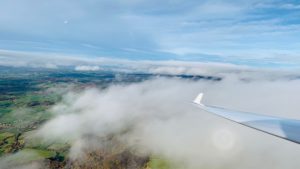 11 of the day's 16 launches equaled or exceeded 30 minutes, with 7 of these exceeding an hour, the longest flight being by Jesper Mjels in his DG400, just over 4 hrs.  However, his post flight track was not available so details of where Jesper went or how high he climbed are not available.  Steve/Andrew and Fred Brown posted the next longest flights, 3:58 and 2:19 respectively, with the other > 1 hour pilots being Nick Gaunt in the Astir, 1:42, Bruce Grain and Andy Tyas in the DG500, 1;17, John Carter in the DG303, 1:01 and Brian Wise and Conrad Kalalec in K21 KLW with exactly an hour.