Friday 19th.  A light to moderate W'ly brought another hill and wave soaring day at Sutton, with a number of flights getting to above 10,000' asl. 18 ATs were flown off runway 24 with Steve Thompson and Dave Thompson 1st off in the DG1000 on another attempt to fly the club's 200 km wave task.  This time they reached Barnard Castle but were unable to get to Pateley Bridge due to 8/8's cloud cover.  Steve has supplied a couple of photos, the first showing a nice wave bar stretching towards the coast and the second showing the extensive cloud cover preventing an approach to Pateley Bridge. 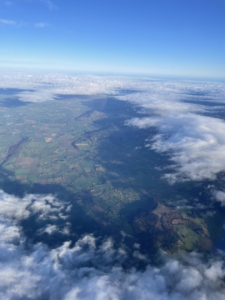 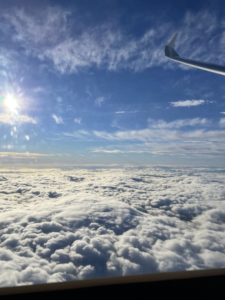 Steve and Dave flight of  2 hrs included a peak altitude of 11,700' asl, 3 other flights climbing to 10,000' or more.  Two of these were by Fred Brown in his Ventus, a morning flight of 1:42 getting to 11,100' just north of Thirsk, while his afternoon flight of 1:34 included a peak altitude of 12.800' near Ripon.   Fred noted that there was less cloud in the afternoon, and also experienced a Crisp packet explosion, the affect of reducing pressure on Crisp packets being illustrated in the following photo, Fred this time being able to enjoy the contents before the packet exploded. 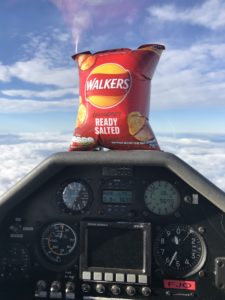