Tuesday 12rh.  A weak cold front draped down the right flank of a high pressure over the UK brought low cloud and bit of light rain and drizzle to the site on a light N/NNE'ly wind so there was no flying.

Wednesday 13th.  Cloudy conditions again prevailed with transient wave slots coming and going as a initially light to moderate SSW'ly blew.  The cloudbase of around 1400' QFE meant the early ATs off runway 24 were soon back on the ground, but late morning the wind veered into the W and increased to moderate, with the cloudbase rising to around 1600' QFE and later getting to around 2,000' QFE.  The prospect of hill soaring and possibly wave, led to increased activity at the launch point and this continued until early evening,  due in part to a visitor from Pocklington and YGC's Martin Newberry undergoing a series of tugging checks with John Tayler in the latter's Super Cub, with members and visitors providing the single seat guinea pig gliders.  In all, 33 launches was the day's total, 5 First Flight pupils being part of this, while mainly hill lift but some wave led to 14 flights of over 30 minutes with 8 of these over an hour.  Martyn Johnson in his DG600 was the first to contact the wave as a slot opened over Sutton village, but Martyn was unable to make much progress west to stronger wave, which limited his climb to around 6,100' asl in his flight of just under 3 hours.  Jesper Mjels, self launching in his DG400 contacted the wave over Thirsk and made steady progress westwards reaching his maximum altitude of around 13,000' asl west of Richmond in his flight of just over 3 hours..  Nobody else made any significant wave climb, although George Rowden and Albert Newbery, flying a mutual in K21 JVZ contacted the wave in a slot just downwind of the site, but with the slot steadily moving downwind and closing, made a high speed return to the site, continuing the flight in a mixture of low level wave and hill lift which was the order of the day.  Visiting pilots from the Portsmouth GC  populated the duration list, providing 6 of the 8 flights of over an hour, the longest being Nigel Clark's 2:10 in his PIK 20D, the aforementioned George Rowdena and Albert Newbery's 46 minutes being the longest of the 6 flights to fall between 20 and 60 minutes.  The recently returned Eurofox, photo below, restarted tugging duties, but a malfunction of the engine management system display meant these were limited to 4 launches. 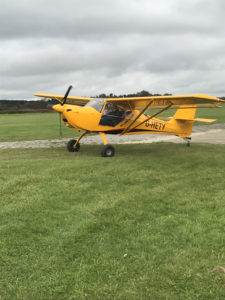