Thursday 7th.  A light to moderate S/SW'ly airstream ahead of a stationary front over Northern Ireland and Western Scotland brought with it low cloud and unseasonably high temperatures, reaching 17.7C at site.  The combination of low cloud and Pawnee unserviceability meant only single seaters could be launched behind John Tayler's Super Cub, initially to  low altitudes.  Later, the cloud broke up sufficiently to allow higher launches with Jesper Mjels in his DG400 using his engine to contact wave and explore as far as Aysgarth, Leyburn and Masham in a flight of just over 3 hours, reaching around 6,400' asl, while visitor Paul Cooper in  his Mosquito progressed as far west as the East Coast Main Line in his flight of just over an hour. The only other flight of over an hour saw visitor G Stamford have 1:18 in his ASK14 motor glider.  The visitors provided 11 of the 12 launches off runway 20, with YGC member Sarah Stubbs taking the Astir for a 12 minute flight, this being more typical of the day.

Friday 8th.  The warm, light to moderate S/SW'ly flow continued, but a drier air mass meant a day of sunshine, albeit with variable amounts of high, thin cover.  Operations off runway 20 were again initially restricted to single seaters behind the Super Cub, but later Pawnee EV became available allowing 2 seater launches.  In spite of the warm sunshine and indications of wave, staying up proved to be difficult, with only 3 flights of the 16 flown on the day lasting over 30 minutes, some resulting from high tows.  Visitor N Noble in his DG300 topped the list with 34 minutes, followed by visitor C Jones in his Speed Astir with 32 minutes and YGC member Tony Drury in his DG303 with 30 minutes, Tony supplying the following photo of a pleasant day at site. 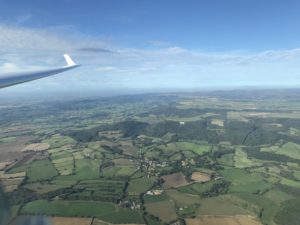 The initial tug restrictions led to the first of the day's First Flight pupils electing to have a flight in the Falke with Ian Macfarlane.  This proved to be somewhat eventful as an in-flight indication of low oil pressure led to Ian shutting down the engine and doing a dead stick landing onto runway 20.  The other notable event of the day was a re-solo by Adrian Bennet, a 17 minute affair in K21 JVZ after being checked out by Ron Beezer, so congratulations Adrian.