Wednesday 22nd.  A depression to the north of Scotland generated a moderate/moderate to fresh WSW'ly at site with the result being a good wave soaring day, with 3 cross countries >350 km, 5 climbs to >10,000'asl and 9 of the day's 22 launches being aloft for > 3 hours.  The first of the  three long cross countries was by Bill Payton and Dave McKinney, who in Bill's DG100 covered around 400 km, visiting Appleby, Richmond, York, Wetherby, Ripon, Knaresborough, Pateley Bridge and Hawes in a flight of around 6:30.  Another 400 km cross country was flown by John Ellis in his DG800 with TPs at Pateley Bridge, Kirby Stephen, Hawes, Ripon, Wetherby, Barnard Castle and Rufforth, while Andy Wright, abandoning his attempt to visit Hexham due to a lack of lower level wave cloud north of Teesside, completed a 366 km flight with TPs at Stanhope, Ripon, Wetherby, Grains and Harrogate North.  The high climbers were Bill and Dave with the best climb of the day to around 12,900' asl, followed by Chris Handzlik in his DG300, 11,300', Martyn Johnson in his DG600, 11,100', Thomasz Rusin who flew the DG303 up to 10,900', Ron Beezer and Christina Griffiths, 10,100' in the DG1000 and Arthur Dochery who reached the same height in his ASW20.  Confirmation of the latter 2 flights is shown in the following photo showing Arthur's ASW20 from Ron and Christina in the DG1000 at 10,000' asl over Pateley Bridge, while the other photo was taken by Thomasz Rusin, with his flight getting him his Silver Duration, so well done Thomasz. 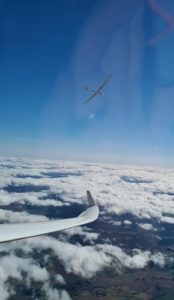 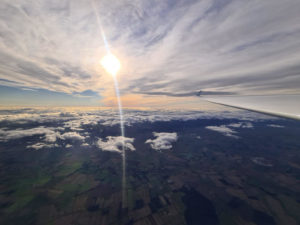 With the nights rapidly drawing in it won't be long until the Tuesday evening flying group pack up their bags until next year.  However, Tuesday 21st saw  Andy Evan's celebrate the successful completion of his Bronze C and Cross Country endorsement, some 56 years and 50,000 + hrs of flying after his first solo as the following photo shows. 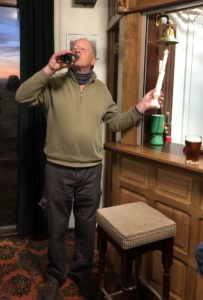 The weather also put on a good show at the end of the flying too, as illustrated below. 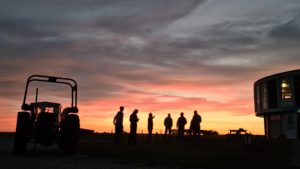