Thursday 16th.  An area of  high pressure brought of day of Cumulus filled skies as a light to moderate W'ly blew, the conditions tempting 11 private owners to rig and fly.  Conditions aloft were not as good as it  appeared, but  14 flights of the day's total of 36 exceeded 30 minutes, of which 8 were over an hour, some by a considerable margin.  Chief among these were the 5:35 by Clive Swain in his Kestrel, 3;49 by Steve Thompson in his Ventus, 3:06 by John Ellis in his DG800 and 3:05 by Bill Payton solo in his DG1000.  A number of cross countries were flown, with Bill visiting Whitby,  Scarborough and York, John Ellis Pateley Bridge and Scarborough, Clive Pickering and Malton, and Steve Grassington and Carlton Bank.  Steve also went sea breeze front hunting east of Carlton, only finding sinking air that resulted him having to use his engine to reconnect with the lift further west.  As well as convective activity, with climbs to between 4 and 5,000' asl, there was also some wave, with Chris Handzlik climbing to around 6,500' asl on his flight visiting Northallerton and Leyburn.  Others to have an hour or more included Tony Drury in his DG303, Paul Bulmer in his Libelle and Dave McKinney and his Day Course pupil in K21 KLW.  Congratulations are also in order for Sarah Stubbs who had a successful conversion to the Astir and made the most of it with a 47 minute flight.  A photo of Sarah is shown below receiving congratulations from Peter Goodchild. 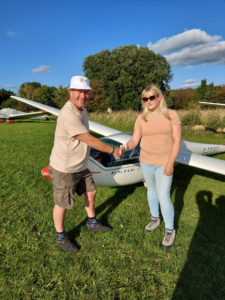 Friday 17th.  The high pressure was still in place but had moved further east so  that the wind was now a light to moderate S'ly.  Banks of murk existed in the Vales of York and Pickering, but the site was in hazy sunshine so flying got underway just after 1015 hrs off runway 20.  The murk to the south was readily visible, while isolated fracto cumulus around 600' QFE slowly consolidated  and became more extensive but not enough to stop flying, albeit with a base or around 1300' QFE by late morning. This trend continued, so that soarable Cumulus with a base around 2,000' QFE were present by early afternoon, with 9 private owner launches thereafter.   The first of these was by Nick Gaunt in his LS7, followed by John Marsh in his DG303 and John Ellis in his DG800. Nick had 2:15 as he visited Helmsley, Borobridge and Knayton, John 2:04 with visits to Helmsley, Thirsk and Cowesby and John had 1:58 as he flew the 100 km Sutton/Pocklington/Rufforth, Sutton triangle, reporting tricky conditions.  Others to have at least an hour of soaring included visitors David Noble in his DG100, Phil Morgan in his Janus, Andrew Peacock in his Mini Nimbus and YGC member Les Rayment in his DG800.  There were no > 1 hour flights by pilots of club gliders with Clive Swan and Mark Batin heading the >30<60 minute list with 38  minutes in K21 KL followed by Thomasz Rusin with 37 minutes solo in the same glider.  In total 13 flights exceeded 30 minutes with 7 > an hour and 6 members of the public were introduced to gliding and soaring.