Saturday 25th.  A light to moderate SSW'ly that slowly backed into the SSE brought cloudy skies thick enough for some light drizzle at times, with little chance of soaring conditions.  In spite of  this the launch point on runway 20 as busy from mid-morning until late afternoon as 19 ATs were flown, 7 of these being for First Flight pupils, one of whom had the second longest flight of the day, 21 minutes with Fred Brown in K21 KLW.  Fred also gave his guest Neil Stephenson, the longest  flight of the day, 22 minutes, in the same glider.  Astir pilots Sarah Stubbs (2 flights) and Andy Tyas, plus DG303 pilot Dave Thompson investigated whether single seater gliders had a duration advantage over the 2 seaters, with the result a resounding no.  While it may have been a relatively unexciting day at Sutton, over at Pocklington,  Toby Wilson successfully completed his BGA ASCAT course, so well done Toby.  The photo below shows, left to right,  Graeme Cooksey, member of the Wolds GC who also was on the course, Tony Kendall, course coach, Ged Terry, examiner and Toby. 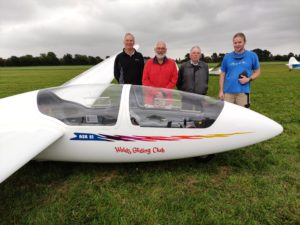 Sunday 26th.  The log for Sunday is yet to be received so the report will be provided at a later date.  However, the good news is that Ben Haslam has was successful with his application for a Caroline Award Busary, so well done Ben.

Monday 27th.  An active Atlantic front brought of short period of heavy rain around 0800-0900 hrs with the weather rapidly improving thereafter, the W'ly wind becoming fresh as the front passed and then declining to become moderate.  Like Friday 24th, Jesper Mjels was the only pilot to fly, self launching in his DG400 and using wave to have a flight lasting just under 5 hrs. During his flight, Jesper visited Thirsk, the Tontine and the area between Ripon and Masham, but I have been unable to ascertain his maximum altitude.

Tuesday 28th.  A small, transient ridge allowed a morning's flying before an active front brought low cloud and rain from lunch time.  The morning's operations were off runway 20 as a initially moderate S'ly blew, this declining to become light as the front passed.  The day's flying was restricted to 5 launches, 4 of which were for First Flight pupils, while the remaining flight saw instructors Chris Collingham and Clive Swain fly the DG500.    The day's First Flight pupils, mainly flying in K21 JVZ with Laurie Clarke, had flight times of between 18 and 25 minutes.

YGC Expedition to Millfield.  Colin Troise's report on YGC flying at Millfield is given below.

Saturday 25th
Our thanks to Mark for bringing the Dg1000 to the airfield on Friday, which meant that Bob and Martin could have an early flight on Saturday morning and get into the wave to 4000. Bob again flew in the afternoon, but this time with Marian, who also had a wave flight. Tim flew his ASW20 twice, the length of the second flight compensating for the shortness of the first! There are a fair number of visiting pilots here, as Darlton and Stafford also have sizeable contingents at Milfield.

Sunday 26th
A very busy day for Milfield as the good weather – unseasonably warm for the time of year – brought out their local pilots in addition to the three visiting clubs. All of the YGC aircraft flew, although two pilots had short flights – conditions were tricky and highly changeable with wave which was quite fickle, and thermals that were broken up by the wave influence. Martin and Marian both had a flight with Bob in the 1000, with Martin having an hour in the early, but short-lived, wave that appeared in the morning, and Marian having two hours in the afternoon’s re-appearing wave (with broken thermals). Tim, Paul, Jim, John and Colin each flew their own planes with Colin using a mix of luck (mostly), experience, and skill (ahem!), to get to 7100; this pales into insignificance, of course, when compared to the local Libelle, which reached 12,000. John arrived with Mark’s loaned ASW20 at the end of the flying day. Andy was also here for for the day to attend a BGA Safety Officers briefing.

Monday 27th
The really pleasant summer weather left us overnight, the temperature dropped 10 degrees, and the rain set in for much of the morning, but it started to clear around mid-day, and Milfield authorised launching. We have been fortunate that the club has allowed us to store the DG1000 in their hanger, so it becomes the first aeroplane out in the morning, and henceforth had the first launch. Bob and Colin took a rather sporting launched to 3000, with rather close views of Milfield Hill, but were unable to find much thermal, and also found no ridge lift on the northern corner of Newton Tors, so landed with only 19 minutes on the clock. JohnC and Bob then took another launch in the 1000, but asked to be dropped in the College Valley, where they had an interesting time staying aloft on Newton Tors, but were not convinced that the ridge was all that happy to see them. An approaching rain-shower decided the landing! Conditions were such that no other YGC pilots had decided to rig, and shortly after the 1000 landed, at approximately 16:00, the club decided to stop launching because of the increasingly strong wind.

Tomorrow morning’s forecast looks to be for good wave, but only until mid-day. Tomorrow evening’s forecast is for a group nosh at the Tankerville Arms Hotel.

Earlier in the week, on Thursday 24th, YGC member Paul Whitehead flew a 316 km wave task out of Portmoak in his Ventus, spending the majority of the flight between 9 and 10, 000' asl.   At Denbigh, YGC member Thomasz Rosin had a wave flight to 14,000' asl in the Arcus from which he has provided the following photos. 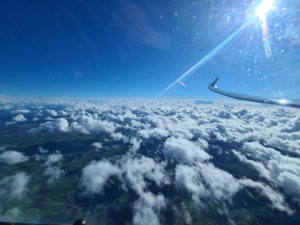 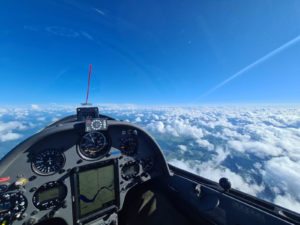