Wednesday 19th.  My suggestion of the winner of Day 1 of Task Week turned out to be correct with Andrew Cluskey claiming top spot, with Fred Brown 2nd. John Ellis 3rd and Toby Wilson 4th.  After a non contest day on Tuesday,  the weather on Wednesday as a light to moderate W'ly blew was more promising and a task was set for the day, the competitors and those not in the competition enjoying lift in the form of thermal, hill and wave.  A busy day ensured with 33 ATs off runway 24, 15 generating flights of over 30 minutes with 9 of these  over an hour.  The 4 competitors on Day 1 of Task Week were joined by Steve Thompson and Tomer Altman flying the DG1000, and with TPs at Catterick, Pateley Bridge, Wetherby and Boroughbridge, plus a climb in wave to 9,300' asl, they won the day.  Fred Brown flying his  Ventus was second on the day, visiting a number of local TPs and climbing to around 5,700' asl from where he took the following photo. 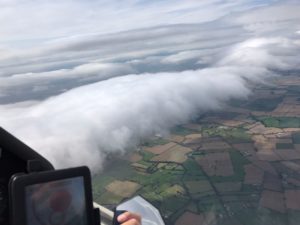 Andrew Cluskey in his Shark was 3rd with a climb to around 5,000' asl. with John Ellis 4th in his DG800, his score being boosted by a climb to 8,100' asl.  Toby Wilson had a relight in  his Standard Cirrus but fared not much better on his second flight landing out near Kirby Knowle to score 132 points.  After 2 days competition, the order was Fred, Andrew, John, Steve/Tomer and Toby.  Other pilots to contact the wave were Martyn Johnson in  his DG600, 5,400' asl, Paul Whitehead and Amelia Forrester in K21 KLW, 5,700' asl, and Bill Payton and Stuart Heaton in their DG1000, 4,900' asl.  The wave did not go particularly high, with Jesper Mjels in his DG400 climbing to 7,400' asl in spite of searching as far as Brough over the Pennines in a flight lasting just over 7 hours.  The day also saw a second land out with Conrad Thwaites introducing the Discus to a field near Thimbleby.

Thursday 19th.  The sequence of a soaring day/circuit day continued with overcast skies in a light to moderate WSW'ly ruling out the possibility of a Task Week competition day.  Nevertheless, 9 ATs were flown off runway 24 and with some soft hill lift and weak thermals 3 launches led to flights of 30 minutes or more.  Bruce Grain and Simon Altman topped the list with 43 minutes in K21 JVZ, with Bruce and John Dore next with 38 minutes.  Les Rayment and Dan McClean completed the list with 30 minutes in JVZ, with only JVZ and the DG500 flown, the latter mainly for the 4 First Flight pupils of the day..  The only cross country flying of the day was by the Falke, which on one or more of its 4 flights visited Ripon, Harrogate North, Helmsley, Boroughbridge and Thirsk.