Saturday 14th.  A light to moderate and at times moderate W'ly meant it was a day of mixed launch methods with 6 intial ATs off runway 24 changing to winching with 13 flown,  and later, as the wind speed dropped, reverting to ATing with 6 flown.   In addition there were 2 self launches.  The day, as well as providing a mixture of launch methods, also provided a mixture of soaring means, with hill, thermal and wave available. although the latter was only utilized by 3 pilots.  Two of these  were flying self launching gliders with Jesper Mjels in his DG400 having his 4th significant wave flight in 3 successive days and John Ellis in his DG800 making a climb to 12,100' asl while visiting Osmotherly, Masham and Ripon.  Jesper did his main climb to 15,900' asl over Catterick with other climbs over Reeth, and between Brough and Bowes, going as far north as Stanhope before returning to site after just over 4 hours.  Jesper also provided a very nice photo of an evening descent from wave which I think was taken on Friday evening after his second wave flight of the day. 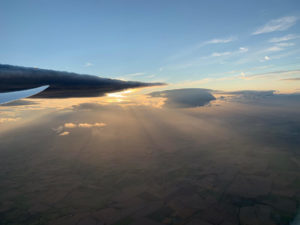 The third pilot to have a significant wave climb on Saturday was Darren  Lodge in his LS8-18, climbing to around 8,200' asl over the site in his flight of nearly 6 hours and providing the following photo. 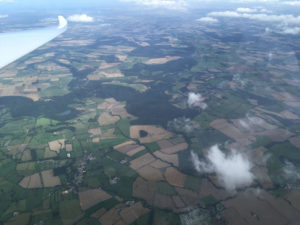 Other pilots with flights of over an hour included,Toby Wilson in  his Standard Cirrus, 1:52, Arthur Docherty in his ASW20, 1:37, and Dave Thompson in the Discus with 1:40, with Ben Dawson in the Discus getting close with 58 minutes.  None of the day's 2 seater flights exceeded an hour with the best being 46 minutes by Fred Brown and Ian Bullous in K21 KLW closely followed by Jamie Quartermaine and Sarah Stubbs with 45 minutes in K21 JVZ.

Sunday 15th.  The W'ly remained in place but had declined to light overnight but the skies remained overcast all day preventing a real task being set on the first day of the club's Task Week.  Undaunted, a virtual task was set on the simulator with an O/R to Garbutt's Wood, just beyond the NW of Gormire Lake, the best time from take off to landing being the winner. With a 27 kt W'ly blowing one might be a little mystified as to the shortness of the task, until the selected glider was identified as a Grasshopper Primary.  5 pilots took part with the following result

Les Rayment - 6:27:39
Sam Dawson - 6:52:27
John Ellis - 9:02:09 (crashed at correct landing location)
Arguments over whether Fred or Ben won, based on Fred's good approach but non-existent round out, did not conclude.
The only real flying was by Bruce Grain and Sam Dawson in K21 JVZ who had 34 minutes exploring whether the ridge was working while Toby Wilson took a First Flight pupil up in the same glider for 13 minutes.