Friday 21st.  The sequence of non-soaring/soaring days came to a halt on Friday as a cloudy light S/SSE'ly airflow restricted soaring opportunities although not preventing flying.  Consequently, the wasn't a task set for the Task Week competitors so  the day's flying was club based, although John Marsh flew his DG303 for 1:12, the longest of the day, just to prove that soaring was possible.  No one else from the day's 10 launches  managed over an hour with Brian Wise and Oscar O'Dell in the DG500 having the next best duration with 35 minutes.

Saturday 22nd.  A slow, eastward travelling cold front provided a day of low cloud and rain, the latter amounting to 7 mm, so there was no flying although members were encouraged to fly the simulator after a recent upgrade.  Saturday marked the end of Task Week and with two contest days, the winner was Fred Brown in his Ventus, having, by mutual consent of the participant s, discarded the previous rule that the Task Week Director couldn't win.  Fred's winning total came from 2 second place flights, with Andrew Cluskey in his Shark coming second after winning Day 1, John Ellis in his DG800 coming 3rd, Steve Thompson and Tomer Altman coming 4th after winning Day 2, Toby Wilson in his Standard Cirrus coming 5th and Les Rayment in his DG800 coming 5th.  The following photos show, in order, Andrew receiving his  prize for winning Day 1, Steve Thompson and Tomer Altman receiving their prize for winning Day 2, Fred receiving his Task Week winner's prize from Andrew, surrounded by most of the other competitors, and Toby Wilson proudly showing off his Task Week mug which each competitor received. The proceeds of the week, which in spite of limited flying was enjoyed by those taking part, were donated to the Yorkshire Air Ambulance. 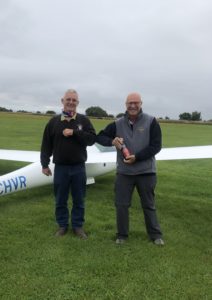 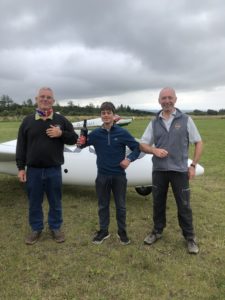 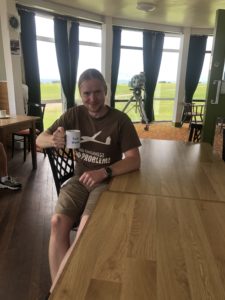 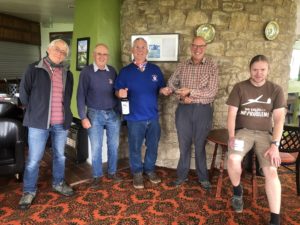 Sunday 22nd.  The low overcast, brought in on a light N/NE'ly continued to frustrate those wanting to fly with the exception of the Falke pilots who had a sortie and did an O/R to the Tontine.