Friday 2nd.  A light S'ly brought Cumulus filled skies and soaring opportunities that led to a number of cross countries and local soaring flights, 11 of the day's 16 launches off runway 24 providing flights ranging in duration from 4:26 to 31 minutes. Tasks involving TPs at the Tontine, Helmsley and Rufforth were popular, with Martyn Johnson reaching the first 2 but not quite the latter in his DG600,  Chris Handzlik visiting the Tontine and Rufforth in his DG300 and Tor Tavener getting to the Tontine and Helmsley in his ASW20.  2 other unidentified pilots also visited the Tontine and Helmsley, while Nigel Burke in his DG800 booked the trend and visited Stamford Bridge and Ripon with an intermediate visit to Sutton.  An increasing cloud base allowed climbs to above 4,000' asl, with Martyn Johnson getting to 4,700' asl, the best of the day.  Clive Swain in  his Kestrel 19 topped the endurance stakes with 4:26 with Chris Handslik and Martyn Johnson both having in excess of 2 hrs flight time, while syndicate partners John Marsh and Tony Drury roughly shared a combined flight time of 3:09 in their DG303.  Those flying club gliders were not to be outdone, with Steve Ogden having 1:22 in the Astir and Chris Collingham and Toby Wilson having 1:04 in the DG1000, including a visit to the forward ridge.

Saturday 3rd.  A day of low cloud and showers, this including a thunderstorm in the evening, as a light to moderate SE'ly blew meant it was a non flying day.

Sunday 4th.  A light to moderate SE'ly blew, bringing in low cloud that delayed the start of flying until 1100 hrs.  Only 4 flights were launched after that due to low demand, with two of these being for First Flight pupils and the remaining two by Malcolm Morgan/Keith Brockelsby in K21 KLW and a solo flight by Toby Wilson in the DG500.   Flight times ranged from 12 to 27 minutes with flying coming to a halt in the early afternoon due to the approach of thunderstorms, the following photo showing a nearby lightning strike. 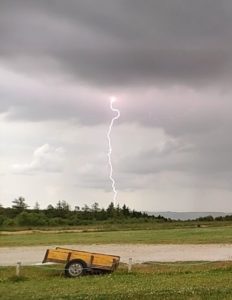 Prior to the cessation of flying, the Falke had a staycation, visiting Whitby and Scarborough in a flight of an hour.

Monday 5th.  The wind had become moderate from the SW/WSW so operations were off runway 24, pilots electing to land on either 24 or 20.  Flights were limited to 6 due to a late start and  an early finish as rain approached from the SW in the late afternoon.  In between  Steve Hunt had 3 flights in the DG500 with either Bruce Grain and John Carter, while Bruce and Dave McKinney flew the day's First Flight pupils.  3 of the flights found sufficient lift to extend their flight times just beyond 30 minutes, helped in a couple of cases by high tows.