Wednesday 2nd. A blue day with a light to moderate ESE/SE'ly flow did not tempt many to fly.  KTrax, the online log sheet, recorded 2 ATs off runway 06 resulting in flight times  of 12 and 18 minutes in K21 KLW, but I couldn't find the analogous paper log sheet so the pilots remain a mystery.

Thursday 3rd.  A light to moderate ESE'ly blew,  this veering into the S as the day progressed.  A medium level overcast meant it was mainly a day of extended circuits off runway 20 with 2 seater flying only, K21's KLW and JVZ being used for the majority of flights and the DG500 only used for one of the day's 16 ATs.  The overcast did thin sufficiently at times to allow some thermal activity, this being primarily used by John Carter/Kai Fordham Brown in their JVZ flight of 50 minutes and by Chris Collingham and visitor J Milner who had 43 minutes in the DG500.    The best of the  rest saw John Taylor take one of the day's 5 First Flight pupils for 27 minutes off the last flight of the day.

Friday 4th.  The day was characterized by a light S'ly and the presence of large patches of thick Cirrus that meant only isolated Cumulus formed.  Nevertheless, some long cross countries were flown, although the majority of departures from the site were more limited in distance.  Rob Bailey in his ASG29 flew 347 km around some of his favourite TPs at Rydal Bridge, Haydon Bridge and Grimwith Reservoir, having to deal with weak lift over portions of the task but was rewarded with some superb views while in the Lake District.  Dave Latimer in his ASW 3M  also headed in the same direction, going well west of  Pateley Bridge before returning via Barnard Castle and Northallerton.  John Ellis in his DG800 flew to the SW of Masham before returning to site,  while Steve Thompson favoured a southerly route, but progressed as far as Haxby, just north of York, before coming back home.  Andrew Cluskey decided an easterly venture was more promising and found a convergence over Rosedale that he utilised for a while before he too returned to site. 13 of the day's 33 launches resulted in flights of >30 minutes with 7 being > an hour, the majority of the longer flights being by private owners.  However, Clive Swain and Tom Crossman had 1:01 in K21 JVZ off the last flight of the day,

Saturday 5th.  The forecast of a good soaring day resulted in a busy trailer park and launch point, the day's launch total being 49, of which 31 were by private owners with glider performance ranging from a T21 to an ASW 3M. 20 cross countries were flown, with a favoured task being Kirton in Lindsey/ Helmsley and Goole North, a task of 304 km.  Chris Booker in his LS1, John Ellis in his DG800 and Martyn Johnson in his DG600 all completed the task, with Chris achieving his Gold Distance, so well done to him.  Kelly Teagle in her ASW 20, who had suggested the task, had to abandon her attempt as her Camelbak slipped out of reach behind her seat and fearing dehydration on a warm day, returned to Sutton after reaching Kirton, covering 188 km.  Nick Gaunt in his LS7, taking off a little late, flew first to Guisborough and after trying to get to the east coast encountered a sea breeze front which he followed south to the Humber Bridge, having to detour around the Fylingdales zone.  A cloud climb to 6,000' asl followed from where the following photo was taken looking west. 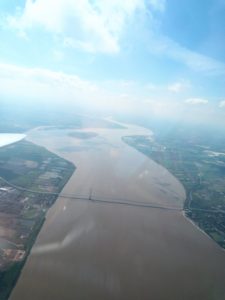 As conditions to the west were looking, to quote Nick, rubbish, he returned to Sutton via Malton using the sea breeze front which had conveniently moved further inland, arriving back at site after covering around 230 km. The flight was made 70 years to the day from when Nick had his first glider flight, so a great way to celebrate a very notable anniversary.  Bill Payton and Stuart Heaton in their DG1000t, also started off with a visit to Guisborough, following this with visits to Snainton, Market Weighton and Pocklington, while Rob Bailey in his ASG29 also started with a visit to Guissborough before turning Ripon, Garforth and Beverley.  Steve Hunt in his ASG29 flew Pickering, Burton on Stather and Burn, Derek Taylor combined an O/R to Sheffield South with a wiz around the Pocklington, Rufforth triangle, while Steve Thompson included TPs at Carlton, Kirbymoorside, Beverley and Northallerton in his flight of 220 km. Andrew Cluskey flew his Shark around Pocklington, Hawes and Newbiggen, while Ron Beezer in his Nimbus 2, did a local tour with TPs at Rufforth, Pocklington. Ripon, Northallerton and Thirsk.  It was not all easy going however, as Darren Lodge in his LS8-18 and Greg Corbett in his Kestrel 19 both abandoned their longer tasks to cover 137 km and 159 km respectively.  As far as flying club gliders was concerned, Andy Tyas and David Watson each had over 2hrs, Andy in the Astir and Dave in the DG303, while Fred Brown and Andy Sayer had the longest club 2 seater flight with an hour in K21 JVZ.

Sunday 6th.  The wind continued to be light, but starting off in the NNW it progressively veered over the course of the day, to become SE'ly by the end.  The day's 11 ATs were all off runway 24 and utilised all 4 of the club 2 seaters, Ron Beezer and Graham Evison taking the DG1000 for a 1:37 test flight, the longest of the day.  The afternoon's flying saw all but one of the 8 flights exceed 30 minutes flying time, this including Ron/Graham's flight, although no one else exceeded an hour.  Closest to that particular goal was Tor Taverner who had 59 minutes solo in K21 KLW, followed by Steve Thompson and Martin Joyce who had 56 minutes in the same glider. The day also saw 5 members of the public introduced to gliding, with Toby Wilson flying 4 of them.