Saturday 29th.  An anticyclone started to build in, providing a good day's soaring as the initially light W'ly soon backed into the SE and strengthened to become moderate late in the day.  The day's 27 ATs off runway 20 included 12 by private owners, with a number of cross countries flown and 13 flights of over an hour.  Those flying cross countries reported better than expected conditions with Chris Teagle covering 136 km in  his Kestrel, with TPs at Burn and Northallerton, Derek Taylor completing the 100 km Pocklington/Rufforth triangle and then continuing on with an O/R to west of Aysgarth to clock up 220 km in his ASW22 and Nick Gaunt investigating an active convergence over the NY Moors before visiting Northallerton and transiting a rather tricky Vale of York before going beyond Pateley Bridge to some Cumulus Congestus and then returning to site, a distance of 213 km.  Nick's flight in his LS7, the longest of the day at 3:39, included a cloud climb to 8,000' , the following photo being taken shortly after leaving the cloud. 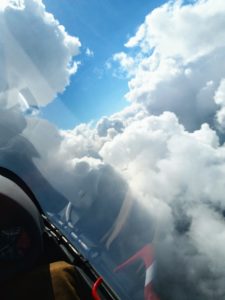 Another visit to west of Pateley Bridge was made by Stuart Heaton and Bill Payton in their DG1000t, their flight  of 2:58 also taking in   Wetherby, Northallerton and Ripon.  Others to venture forth included Fred Brown who visited Rufforth  in  his Ventus and John Ellis who took his DG800 to Fridaythorpe and back.  Those flying club gliders for more than an hour included A Sayer flying K21 KLW solo, with 1:08 and Simon Altman with 1:09 in the DG303, while Malcolm Morgan and John Dore posted the longest club 2 seater flight with 41 minutes in the DG500.  It was a good day for the Altmans as Simon's son Tomer successfully soloed in KLW 10 days after his 14th birthday, so congratulations to him.  A photo of Tomer with Deputy CFI Bruce Grain is shown below. 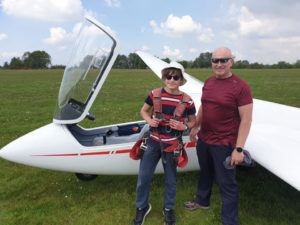 Sunday 30th,  The anticyclone was now well in charge with its light to  moderate SE'ly flow bringing in low Stratus off the North Sea.  This slowly burnt back to the coast, allowing flying to get underway off runway 20 around 1230 hrs. 12 private owners launched into what locally was a blue day, but a convergence situated over the northern edge of the NY Moors was explored by a number of pilots.  First to do so was Andrew Cluskey in his Shark who found strong lift on the northern side of the cloud in a line from Osmotherley to just east of Danby, although those arriving later spent their time between Osmotherly and  Ingleby Bowl.  Rob Bailey in his ASG29, the first private owner to launch off the 4th of the day's 24 ATs, set off across the Vale of York to the Masham area, but found only weak blue thermals and a strong inversion at 2,500'. He therefore returned via Northallerton and joined Andrew soaring the convergence, where climbs to 5,000' asl were achieved. Andrew and Rob  had flight times of  2:47 and 2:20 respectively, with later arrivals, Dave Latimer in his Ventus 3M having 1:16 and  John Ellis in his DG800 and Derek Taylor in his ASW22  having 1:26 each.    Those staying local to the site found staying up in the blue conditions more challenging, with only Tony Drury in his DG303 managing more than an hour with 1:15, while the only extended two seater flight saw Brian Wise and visitor Joel Pidd have 34 minutes in the DG500 off a 3,000' tow.

Monday 31st.  The anticyclone was still in place with its light to moderate SE'ly flow again bringing in Stratus overnight, although this cleared quicker than on Sunday, with flying commencing around  1115 hrs.  Blue conditions again prevailed, making staying up a challenge and for those able to do so, a rather  hot and sticky experience although peak altitudes of around 3-3,500' asl did provide some cooler air.  Although a number of private owners rigged only 2  launched, Duncan Pask in his LS10 and Greg Corbett in his Kestrel 19 recording the two flights to exceed an hour, 1:15 in Duncan's case and 1:02 for Greg, with the bowl to the east of the White Horse providing the most consistent area to find lift.   Two  seater launches numbered 9, with two of these flights having 30 minutes or more.  John Carter and Matt Burnham had 42 minutes in K21 KLW while Nigel Burke took First Flight pupil A Whitehead for 30 minutes in the same glider.  The only cross country flight of the day was via one of the 3 Falke flights  of the day, Pocklington and Rufforth being overflown.