Saturday 19th.  A generally cloudy day that eventually cleared to blue skies by the evening did provide some soaring opportunities as a light SE'ly blew.  The day's 29 ATs off runway 20 included 4 by private owners, they also recording the 3 flights to exceed an hour, with a further 5 being between 30 and 60 minutes. Rob Bailey in his ASG29 had 3:13 as he visited Sutton on Forest, Boroughbridge and  Buckden in Wharfedale before retuning to site via Harrogate North, while John Ellis in his DG800 visited Masham, Pateley Bridge and Knaresborough in his flight of 2:35.  Toby Wilson failed to find any lift of his first launch, but off his second had 1:28, utilising a transient convergence of which he took the following photo. 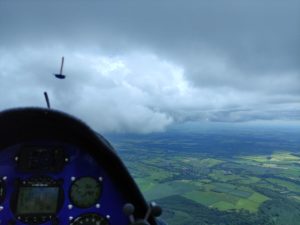 Bob Beck and Naomi Kennard enjoyed 47 minutes of local soaring in K21 JVZ, with Dave Thompson having 46 minutes from his second flight in the Astir.  The Astir was well patronised during the day, with Andy Evans having 5 flights and Mike Collins having 3,  while Chris Collingham and Sarah Stubbs had 41 minutes in K21 KLW.

Sunday 20th.   Another cloudy start to the day, this clearing sufficiently by early afternoon to provide some soaring, principally by Chris Handzlik in his DG300, the only private owner to fly, and visitor Norman Potts who flew the DG500 solo.  Chris had 2;16, venturing as far NE at Bilsdale and as far SW as Sessay in the light NNE'ly wind. Norman stayed more local,but did overfly Oswaldkirk  while also climbing to the best altitude of the day, 4,000' asl in his flight of 1:25.  Ron Beezer and Christina Griffiths almost made an hour, having 58 minutes in K21 JVZ  on a relatively quiet day at Sutton with the AT total off runway 06 being 9, this including 4 First Flight pupils.