Monday 21st.  A decaying occluded front brought low cloud and some light rain/drizzle, the former not clearing until late in the day so there was no flying.

Tuesday 22nd.  The air mass behind the departed front aided convection, so after a blue sky start, blossoming Cumulus tempted 10 private owners to rig and launch with cross country flights into double figures. The day's launch total was supplemented by the start of evening flying, this activity adding 12 to the day's total of 37, virtually all off runway 02 as a light to  moderate N'ly blew, this declining to light during the evening.  Those flying cross country reported variable conditions,  with some good areas and some poor,  leading to some extended low points but no landouts. Tony Drury, for example, had an extended stay at Rufforth as he flew the  Rufforth. Pocklington 100 km triangle in his DG303, while John Ellis struggled just north of Ripon but still managed a 300 km flight in his DG800 with TPs at Pontefract, Staindrop and Garforth.  Another 300 km flight was  completed by Andy Wright in his Nimbus 3 with TPs at Pontefract, Leyburn and Doncaster NW, although poor conditions south of Pontefract on his first journey south led his to abandoning Woodhall services as a declared TP.  Other cross country flights included, Rob Bailey's trip around Woodhall Services and Stanhope in his ASG29, Fred Brown's visit to Pontefract and Staindrop in his Ventus, Bill Payton and Albert Newbery's tour of North Yorkshire with TPs at Rufforth, Leyburn, Grassington and the Tontine including intermediate returns to Sutton, Chris Handzlik's whiz around Burn, Pateley Bridge, Masham and the Tontine in his DG300, Les Rayment's viewing of Pontefract and Ripon from his DG800 and Dave McKinney's tour of Rufforth, Garforth and Ripon in his ASW28.  Not to be outdone, Conrad Thwaites flew the Discus around the Pocklington, Rufforth 100 km triangle while Chris Knapp visited Helmsley and Thirsk in the DG303.  Day course member, Nigel Ford, had a total of 2:12 from his 3 flights while Steve Thompson and Christina Griffiths topped the club 2 seater list with 59 minutes in K21 KLW.  A restful end to a  busy day is illustrated by the following photo. 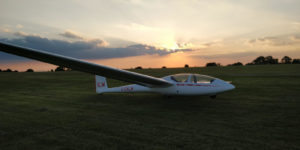