Friday 11th.  Morning drizzle and low cloud cleared as a weak cold front slipped away to the SE, allowing flying to commence around 1215 hrs as a moderate W'ly blew, this backing into the SW later.  Hill, thermal and good wave lift was available, the latter for some, with 7 private owner launches out of the day's total of 19 off  the winch.  The 9 flights of over an hour were split 5 to 4 in favour of private owners but as far as wave climbs were concerned , these were all by private owners, with Chris Handzlik climbing to 4,100' in his DG300, Fred Brown to 9,200' in his Ventus, Ron Beezer to 11,300' in his Nimbus 2 and Martyn Johnson to 13,800' in his DG600, all asl. Ron visited Ripon, Northallerton and Rufforth while Fred visited Ripon and Masham with Conrad Thwaites visiting the East Coast Main Line and the Tontine in his flight of just over an hour in the Discus.  Conrad's flight in the Discus was the only flight in a single seater club glider, but there were 10 flights in club 2 seaters with Colin Troise/Chris Thirkell in the DG1000 and Ian McFarlane and visitor Mr Smith in the same glider both having 1 hour plus flights.

Saturday 12th.  A mainly light W'ly blew and with a good soaring forecast, the trailer park was soon busy, leading to 21 private owner flights from the 37 flown on the day.  The day started well with Bruce Grain and Tomer Altman having 43 minutes in K21 KLW off the first launch of the day around 1100 hrs and continued in that vein until the last flight of the day as Adam Sayer had 1:11 in the same glider.  In-between times, 26 of  the flights exceeded an hour, with a further 3 between 30 and 60 minutes.  Cross country excursions numbered 17,  with wave lift as well as thermals utilised by pilots. Martyn Johnson in his DG600  climbed to just over 9,200'asl while visiting Catterick and Ripon.  Three pilots posted ~300 km tasks on the BGA ladder,  Paul Whitehead in his Ventus flew 348 km with TPs at Market Raisen, Carlton, Knaresborough and the Tontine, climbing to 8,200' asl en route, while Rob Bailey covered 298 km in his ASG29, with TPs at Pateley Bridge, Eastgate, Pateley Bridge and Guisborough,  9,242' asl being his peak altitude.  Steve Thompson in is Ventus visited Kirton in Lindsey, Carlton and Fridaythorpe, 305 km, but didn't claim any height gain points but whether that was due to modesty or non-involvement with the wave I don't know.   Other long cross countries were flown by Derek Taylor in his ASW22, his trace indicating visits to Masham, the area between Richmond and Barnard Castle, Buckden, and Northallerton,  Bill Payton, flying his DG1000 solo,  did an O/R to Kirkby Stephen and John Ellis in his DG800 did an O/R to Kirton in Lindsey.  Chris Teagle flew his Kestrel 19 around Leyburn, Knaresborough, Rufforth and Pocklington, Greg Corbett in his Kestrel 19 did 2 1/2 O/Rs to Rufforth and Darren Lodge also visited Rufforth in his LS18-19 as his circumvented the local 100 km triangle. The day was  not entirely straightforward, however, as 2 cross country aspirants landed out at Rufforth, Ian McFarlane and Simon Altman in the DG1000 while attempting the Pocklington/Rufforth 100 km triangle and John Carter in a borrowed ASW 20, both getting return ATs.  A photo of the above at Rufforth is shown below. 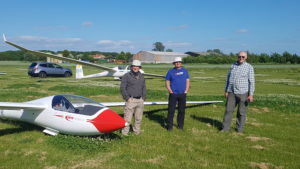 John, Ian and Simon would particularly like to thank Chris Sturdy of the York Gliding Centre, who, as flying at Rufforth had finished earlier, both towed the two gliders to the launch area and ran the wing tip for the AT retrieves.

Club single seater flying saw Malcolm Morgan have 57 minutes in the Discus off the 2nd flight of the day, while Tomer Altman and Ben Dawson both had 1:04 flying a K21 solo.  The longest dual flight in a club glider saw Malcolm Morgan and E Dowler have 1;17  in K21 KLW.