Tuesday 11th.  Another bright and sunny morning with a moderate SSE'ly  saw flying get underway around 1020 hrs.  The unstable air mass, however, led to thundery showers developing by early afternoon, so flying came to a halt at 1450 hrs after 9 ATs of runway 20.  In spite of the unstable conditions, only 1 flight exceeded 30  minutes, John Carter and John Dore having 54 minutes in K21 JVZ, during which they climbed to the best altitude of the day, 3,800' asl.  All the day's flights were via K21s JVZ and KLW, with Jamie Quartermaine having the  only solo flight and Bruce Grain, first with Rob Bailey and then with Robert Wood in KLW, having the next longest flights of 25 minutes.   The day's flying was completed by 2 sorties in the Falke with one of these doing a local ramble by overflying Topcliffe, Ampleforth, Hawnby, Cowesby and Thirsk and indulging in some thermalling..

Wednesday 13th.  A light SE'ly blew for most of the day, tending to increase to moderate by late afternoon, by which time some light showers had developed.  These did not interfere with flying too much and 22 ATs were flown off runway 20, the thermal conditions enabling 5 flights to exceed and hour and a further 3 to exceed 30 minutes.  Most of the soaring  was in the local area, but Steve Thompson in his Ventus 2T visited Rufforth and Northallerton in his flight of 2;23.   Those soaring locally for more than an hour included Chris Hansdlik in his DG300 who had 2:22 and climbed to the best altitude of the day, 4,200' asl.  Duncan Pask had 2:03 in his LS10, Andrew Wilmot had 1:10 in his ASW20 and Martin Newbery had 1:08 in the Astir before almost repeating this in a later flight in the Astir that lasted 56 minutes.    The longest of the day's 2 seater flights was by Bruce Grain and Roger Taylor with 28 minutes in K21 JVZ.   JVZ was also  the mount of Thomas Rusin who had 2 flights of 14 and 34 minutes, during the latter climbing to 4,100' asl.  Thomas then successfully converted to the Astir, the following photo showing a happy pilot after a flight of 26 minutes. 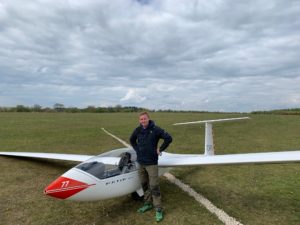