Tuesday 30th.   A light to moderate/moderate SSW'ly brought a high of 19.9C to site plus Saharan dust, while thin  high cover meant a bright, not sunny day.  The conditions were to the liking of the club's instructors and experienced solo pilots,who, after the Covid imposed restrictions, were out in force to take advantage of the opportunity to get back flying. 39 ATs were predominately flown off runway 20 and while most resulted in flights of <30 minutes, the 13 private owner flights generated 5 of over an hour and an additional 6 of over 30 minutes.  Private owners also made the most of some weak wave conditions with the best climb getting Derek Smith in his DG800 to 6,000' asl in his flight of 1:05.  Others combining longish flights with wave climbs included Rob Bailey in his ASG29, 1:33/5,000', Paul Whitehead, Ventus, 1:00/5,000' and Dave Cockburn, ASW19, 1:14/4,600' all altitudes asl.  Andy Wright in his Nimbus 3 had a 1:15  flight without a climb above 4,000' asl and  Nick Gaunt had 1:00 in his LS7,  while Nigel Burke in his DG 800, climbed to 4.000' asl in a flight of 24 minutes.  The 3 available club two seaters were extensively used as solo machines, contributing the balance of the day's flights.

Wednesday 31st.  Another warm day at site even as the topical maritime air mass was slowly replaced by a cooler air mass, but not before a temperature of 20.2C was reached. An initially light SSE'ly slowly but progressively veered into the N by the end of the day with the result that by the time flying ended around 1700 hrs, operations had switched from runway 20 to runway 24.  16 ATs were flown, plus a single Falke flight, but a lack of any appreciable lift meant only 1 flight, that by Andrew Wilmot in his ASW19, managed to stay aloft for 30 minutes, although Chris Collingham flying K21 KLW solo, managed 23 minutes off a 1500' tow.  A number of pilots made the most of the day by having multiple flights, with Graham Evison and Duncan Pask having 3 each.

Thursday 1st April.  The change in airmass on Wednesday certainly resulted in a marked drop in temperature, as a initially moderate and then light NE'ly wind kept the maximum temperature to 8.6C.  The NE'ly flow also brought in a low overcast in from the North Sea that delayed the start of flying until after lunch, around 1330 hrs. Thereafter 5 ATs were flown off runway 02.  The first launch confirmed a low cloudbase of around 1400' QFE, but surprisingly, Simon Altman in K21 KLW, found sufficient lift upwind of the site to deliver a flight time of 28 minutes.  The convective lift, with no indication of location in  the featureless overcast, proved to be somewhat mercurial, as 3 subsequent flights, 2 by Simon and the other by Chris Thirkell, saw them back on the ground within 10 minutes.  Conversely, George Rowden, taking off after Simon's 2nd flight, found sufficient and strong enough lift to climb repeatedly to cloudbase at 1800' QFE from lows of 1200 and 1400' and return to site after 35 minutes, having to circle in sink to burn of excess height for the circuit.  The overcast started to show signs of breaking up as flying stopped for the day, as the following photo shows, while when flying, Teesside could be seen to be in bright sunshine throughout the afternoon. 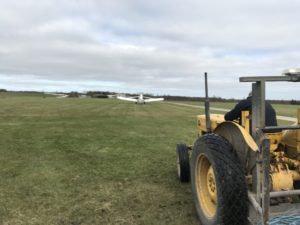