Thursday 8th.  A moderate to fresh WSW'ly meant a day of winching at site with some wave for good measure.  14 launches off runway 24 led to a very mixed bag of flights with the majority of the first 9 being back of the ground in under 10 minutes.  The exceptions were Messrs   Toon in his  LS7 and Cockburn in K21 KLW, who had just over an hour each.  Conditions improved thereafter,  with the remaining 5 flights ranging from 37 minutes to 1:35 and including some wave climbs.  Jesper Mjels, flying the DG500 solo, got to just over 8,000' asl in his flight of 1:35, while Albert Newbery in K21 JVZ climbed to 5,000' and Fred  Brown in JVZ ascended to 4,500' all asl.  Albert and Fred also had flights of just over an hour while Chris Collingham had 54 minutes in JVZ.

Friday 9th.  A southward travelling cold front overnight re-introduced an Arctic air mass to the northern half of the UK while stalling over the southern half. The result was an excellent soaring day at Sutton with high cloud bases, strong thermals, excellent visibility and marked convergences, albeit with a few hail and snow showers to avoid, as a light to moderate NW'ly blew.   These conditions led to 20 ATs off runway 24, including 10 by private owners, with a number of cross country flights and some high thermal/convergence climbs.  Rob Bailey in his ASG29t initially explored into the Dales but gave up the idea of crossing the Pennines and flew a convergence from Catterick to Selset Reservoir, before landing back at site after 294km and a climb to 6,500' in his flight of just under 4 hours.  George Rowden, in his LS8-18t initially flew a local 100 km triangle and then attempted Sut/Pontefract/Beverley/ Sut only to be thwarted by a Sea Breeze front some 17 km inland from Beverley.  The front did, however, provide some very strong lift to over 6,000' and was followed by another convergence on the way back to site, the latter being  reached after 4 hrs aloft and a total distance of around 265 km.  A photo of the sea breeze front taken by George is shown below. 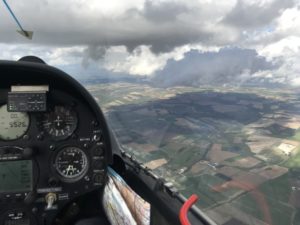 Two pilots, Chris Booker in his LS1 and Andrew Clusky in his  Shark both completed the club 200 km triangle, Sut/Beverley/Garforth/Northallerton/Sut, with the sea breeze front being located just to the west of Beverley earlier in the day, enabling the TP to visited,  even though this meant a trip through the sea air.  Both Chris and Andrew were among the pilots to climb to over 6,000', the others being Les Rayment in his DG800 and Tor Taverner in K21 JVZ, Tor having previously flown his T21 for 30 minutes.  Other pilots to climb to around 5,500' were Nigel Burke in his DG800 and CFI John Carter in K21 KLW.  As well as the above pilots, others among the 11 to have flights of > 1 hr included John Ellis in his DG800, Derek Taylor in K21 KLW on a first recency flight, Malcolm Winter in his Kestrel 19 and Andrew Wilmott in his ASW19.   The site also had a visit from a Pocklington based pilot in his Standard Cirrus on an excellent day's soaring at Sutton.