Saturday 10th.  A cold and frosty night led to a sunny morning with Cumulus blossoming early as a light N'ly blew.  A promise of a  high cloud base and strong thermals saw Rob Bailey in his ASG29 and Andrew Cluskey in his Shark soon off on cross countries,  with both dodging snow showers over the Yorkshire Dales. Andrew returned after 2:19 having flown 213 km around Kirby Lonsdale and Selset reservoir and Rob returned after just over 4 hrs having flown to Rydal Bridge and Haydon Bridge, a distance of 302 km.  By the time they returned frequent snow showers were peppering the local area and both landed in snow, the wind having become a moderate of fresh E'ly.  While Andrew and Rob made it back to site , Rob having a real scrape over the last 20 km, Kelly Teagle, planning to  fly her Kestrel 19 around the Pocklington/Rufforth 100km triangle, found the snow showers blocking her way to Pocklington so decided to reverse the triangle.  However, when she got to Rufforth the snow showers had followed her there so she landed after 1:50 and was retrieved by hubby Chris.  Another Chris, Chris Booker, launched in his LS1, also had his flight terminated by the snow showers, landing after 31 minutes at Bagby, a subsequent AT out enabling him to have another 1;26 in the air and climb to 5,800' asl.  Climbs to around 5,000' asl were the norm locally, but over the Dales Rob climbed to 6,200' and Andrew 6,600' asl.  Among all this activity, Fred Brown had 2:43 in his  Ventus and Tor Taverner had 1:03 in K21 JVZ.  Flying came to a  halt mid-afternoon due to the showers, after 7 ATs from Sutton and 1 from Bagby.

Sunday 11th.  An even snowier Sunday restricted launches to 5, flying commencing at around 1100 hrs and coming to an end around 1515 hrs as a light to moderate NNW'ly blew, runway 02 being the scene of operations.  Chris Teagle flying his Kestrel 19 flew a 98 km cross country with TPs at Leyburn and Pateley Bridge, climbing to just under 6,000' asl and dodging snow showers in a flight time of 2:10.  Chris Booker had 1:20 in his LS1 and Toby Wilson 55 minutes in K21 JVZ before the pair of them mixed de-rigging duties with a snow ball fight, as the following photo shows. 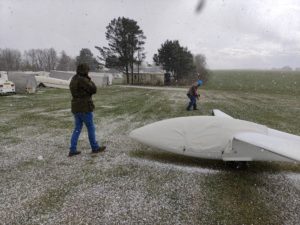 Monday 12th.  Monday saw the relaxation of Covid restrictions which in gliding terms meant instructional 2 seater flying could restart, although mask wearing and cleaning of cockpit interiors in-between flights  was still the norm. A light to moderate NNW'ly persisted through most of the day, but became light and backed into the W later on.  Soaring conditions were excellent with a high cloud base, strong thermals and no snow showers and a number of memorable cross countries were flown.  Top of these was Rob Bailey's 505 km in his ASG29, with TPs at Rydal Bridge, Haydon Bridge. Garforth, Sutton Bank and Barnard Castle, while Paul Whitehead flew  307 km at 92.4 kph around Beverley/Leyburn/Market Weighton in his Ventus  and Nick Gaunt flew 235 km around Pateley Bridge and Humber Bridge at 89 kph in his LS7 as well as taking this great shot of a quarry in the snow covered Pennines. 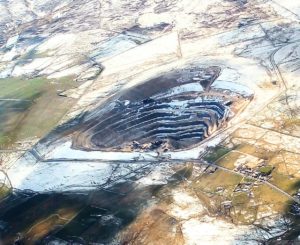 Others to fly cross country included John Ellis who visited Scunthorpe and Masham and Les Rayment who flew around Pontefract and Beverley, both flying DG800s.   The day's 14 ATs off runway 24 delivered  6 flights of >1 hour and a further 7 of >30 min and a number of pilots climbed to 6,000' asl or greater, including Ian Mcfarlane and John Hart, who off the last flight of the day, with John having a refresher flight, climbed to 6,000' in the DG500.

Tuesday 13th.  A light to moderate N/NNW blew all day with good soaring conditions gradually deteriorating as a weak warm front made slow progress eastwards, its cloud depressing convection from mid afternoon.  Nevertheless, a number of cross countries were flown with O/Rs to the Humber Bridge being popular,  Fred Brown in his Ventus and John Ellis in  his DG800 both completing this task, although John had to abandon his declared 300 km due to the approaching warm front.  Similarly, Andy Wright did an O/R to the Humber Bridge, again abandoning a longer task.  Fred recorded the highest climb of the day, to 6,800' asl, while still not at cloud base and also provided this view of the Humber Bridge with  plenty of height in hand. 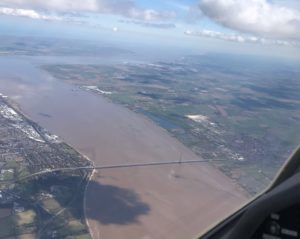 Wednesday 14th.  The dominant high pressure with its Arctic air continued to provide excellent soaring conditions, with John Carter and Chris Handslik having 40 minutes and climbing to 4,600' asl off the second flight of the day in the DG500.  The light wind conditions led to pilots choosing every one of the available runways for landing off the day's 15 ATs, although 06 was the primary runway for take-offs, with only the Falke on its two flights using 02. Two pilots flew cross countries, Steve Thompson flying 213 km around Goole NE/Masham/Wetherby but finding some over-development around York that led to some significant diversions and slowed his speed on task.  Andy Wright, on the other hand, flew an 146 km O/R to Burton on Stather on the other side of the Humber, while the other 3 private owners to launch remained relatively local.  Some good climbs were posted, Jim McLean in his ASW24 getting to 5,800' asl, Dave Thomson in the DG500 climbed to 5,600' asl and the following climbed to > 5,000' asl.  Simona Latimer and John Marsh in K21 JVZ, Steve Hunt in his ASG29E and Paul Whitehead and Sue Aherne in the DG500. Paul and Dave Thompson then repeated the experience in the DG500, while Chris Handslik demonstrated the availability of late lift by climbing to 5,400' asl off the last flight of the day in the DG500, being one of 8 flights  to exceed an hour.  This feat was also achieved by Nick Gaunt and Tor Taverner in their T21, in spite of the temperature at  height being well below freezing.

Thursday 15th.  The anticyclone was now centered over the North of England, so the wind was light and variable, being initially from the NNW, and then backing into the S before going back into the  NE.  Most ATs were off runway 24 but late in the day, runway 20 came into play as 22 flights were launched.  5 of the club's turbo pilots decided to attempt a 320 km task with TPs at Beverley, Carlton Bank, Goole NE and the Tontine and all completed it, although George Rowden taking off last in his LS8-18t, had insufficient height on his return to site from the Tontine to undertake a circuit and had to do a straight in approach to runway 20.  Pilots found the conditions to be good over most of the  task with cloud base around 5-5,500' asl and strong and reliable thermals. However, the approach to Goole NE provided some challenges due to  over-development, with Paul Whitehead diverting to Drax to get a climb and Rob Bailey also having to divert well off track.  As noted above, the area around the Tontine proved difficult for some due to good looking clouds not delivering,  The 5 pilots, in order of take off, were Steve Thompson in his Ventus, Paul Whitehead in his Ventus, Rob Bailey in his ASG29, Andrew Cluskey in his Shark and George Rowden in his LS8-18 and a close spread of handicapped speeds for the  task resulted, being 72,4 kph to 78.3 kph with BGA ladder points being from 1682 to 1825.  For those interested, further details of the flights can be found on the BGA ladder with the flights being viewed all together by clicking here. The day was also notable for a first solo, Thomasz Rusin Rusec successfully completing that in K21 KLW, with Fred Brown presenting him with his wings as captured in the following photo. 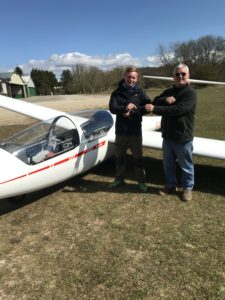 That was, however, not the end of the notable day as Thomasz later had a 2nd solo flight in K21 KLW, staying up for 2:25 and climbing to 5,500' asl.  Not to be outdone, Chris Handslik and Dave Thompson both had first flights in Astir DPO,  with Chris's flight in the late morning lasting an hour and Dave's in the afternoon, just over 3 hours, during which he climbed to around 5,400' asl.  So congratulations to all three of our budding solo pilots.  Commiserations, are due, on the other hand to Steve Hunt who, getting ready to launch in his ASG29, suffered a complete electrical failure.  Not to be thwarted Steve took a local flight of over an hour to enjoy the conditions, one of 14 flights to do so, with a further 3 having flight times of over 30 minutes. on another great soaring day at Sutton.