Wednesday 24th.  The reduction in cloud amounts as Tuesday progressed was continued into Wednesday, the wind being  in the WSW and moderate, so it was another day of winching.  There were 19 flights, 13 solo in one of the three club 2 seaters, 2 in the Discus, 2 in the Astir and 2 by Steve Thompson in his Ventus.  Most pilots had 2 flights and durations  ranged from 6 minutes to over 3 hours, the latter by Steve in his Ventus, with a further 8 flights exceeding an hour and a further 5 flights over 30 minutes.  In addition to hill lift, most pilots enjoyed climbing in wave with heights of around 3-5,000' asl being the norm and 2 flights, one in Discus and one in K21 KLW getting to around 7,000' asl.  For some reason, the Ktrax and paper log sheets for the day did not coincide, so  I am unable to assign pilot to wave climb.  Apart from Steve Thompson's flight of 3:05,  the longest of the day, other long flights were by Bill Payton with 2:19 solo in  the DG500 and 2:14 by Ian McFarlane also  in the DG500. while Dave Campbell, John Carter, Dave McKinney, Brian Wise, Chris Collingham and Ron Beezer were the other pilots to  have flights of over an hour.

Thursday 25 to Monday 29th.  SSW to WSW winds dominated over this period as a deep area of low pressure became established to the NW of Scotland, its cold front crossing the north  of England on Friday morning.  However, although rainfall amounts were very little,  the winds were too strong and gusty to allow any flying to take place during this period although some good wave could be seen, as this photo taken on Monday 29 shows. 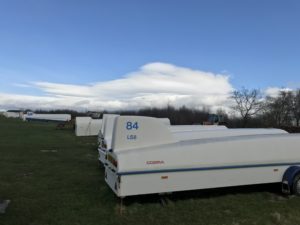 Monday 29th marked a relaxation of Covid restrictions, with solo only flying being allowed to resume for suitably experienced pilots with recency.  Consequently, with calmer weather forecast for the remainder of the week, flying days will hopefully start to outnumber non-flying days.