Tuesday 29th.    Forecast strong and gusty NWly winds plus a very wet airfield led to an decision to cancel flying for the day to save unwanted travelling.  However, in the event, the wind was moderate from the NNW while  a spell of overnight snow turned the field from green to white.

Wednesday 30th. A light NW'ly blew as the sun shone, allowing operations to commence off runway 24 behind the Pawnee, landings being either on runway 24 or 20.  The cold air mass didn't provide anything in the way of lift but did produce problems with airframe and canopy icing, but in spite of these difficulties, the launch total for the day was 14, with  the Falke busy with 4 flights, including an O/R to Rufforth.  The latter was undertaken by Paul Whitehead and Jamie Quartermain, while Paul and Polly Whitehead earlier flew to Roseberry Topping via Northallerton and provided the following photos, one of a scenic view and the other of a happy two. 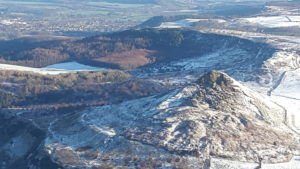 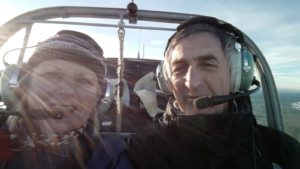 Later, Simon and Tomer Altman also did an O/R to Roseberry Topping in the Falke.  I haven't been able to access the paper log for the day but the electronic one revealed that K21 had 6 flights, the DG500 4, while the Astir and the DG303 had 2 each.  Flight times were typically in the 15-25 minute range but one of the DG500 flights managed 39 minutes, the result of a high tow with the next best being 30 minutes by the DG303.  Some photos from  a sunny winter's day are shown below provided by John Carter. 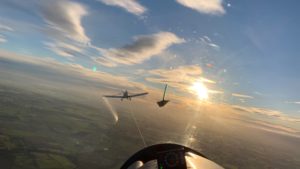 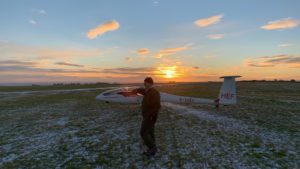 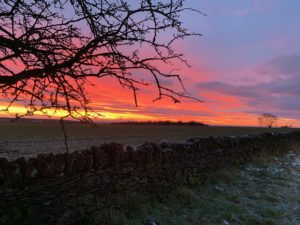 As illustrated, the day concluded with a very nice sunset.

Thursday 31st.  A similar day to Wednesday from a weather perspective, ie blue skies and a light wind from the NNW suggested another flying day, but with even colder conditions, Wednesday's difficulties with icing led to a decision not to fly.

Friday 1st January 2021. A change in the Covid Tier level from 2 to 3  across North Yorkshire  led to a decison to review the continuation of flying operations and so there was no flying on a day with a moderate N'ly and initially cloudy skies.

Saturday 2nd.  A bright start was quickly followed by increasing cloudiness and snow in a light to moderate NNW'ly  so there was no flying.

Sunday 3rd.  With high pressure established to the west of the UK and low pressure to the east, the light to moderate N'ly brought in a series of  wintry showers so there was no flying.

Monday 4th.  The high had repositioned to the north of the UK with low pressure to the south, the light to moderate wind now coming from the NE and continuing to bring in a succession of wintry showers.   Consequently, there was no flying.

Tuesday 5th.  The introduction of a full lockdown in England in response to rapidly increasing infection rates, hospitilisations and deaths  from a more transmittable coronavirus variant,  has resulted in closure of the club for the forseable future.   Your Daily Record of events at the YGC will therefore be suspended but will return when we again take to the skies.   Until then, keep safe.