Wednesday 2nd.  The end of the 2nd period of lockdown in England due to Covid 19 meant flying could restart,  with North Yorkshire being under Tier 2 restrictions.  Initially, attendance at site was limited in both number and to solo pilots with the required currency, but it is hoped to extend to ab initio pilots in the near future.  The weather initially failed to play ball as an approaching cold front brought low cloud, including orographic that shrouded the hill, and eventually a little rain.  However, by midday, skies cleared and Graham Evison was the first to take to the  skies off runway 24 around 1230 hours solo in K21 KLW.  Graham reported some weak wave to the west of the site, but Steve Thompson, taking off next in the Astir found the wave had strengthened and eventually climbed to around 9,600' asl in his flight of just under an hour.  The next two flights, John Carter taking the DG303 for a test flight following its return from its ARC and George Rowden, flying KLW solo, both had just under an hour and enjoyed wave climbs.   John climbing to 10,000' asl and George to 9,000' asl with John providing the following photos. 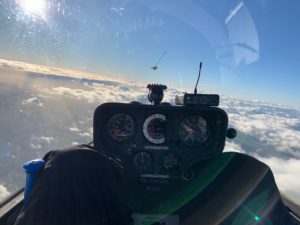 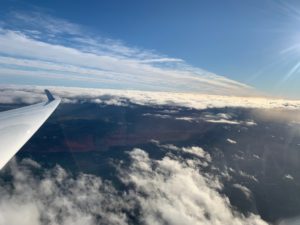 The wave then collapsed, although Ron Beezer, taking off next in the Discus, had the longest flight of the day, 1:02.  Ron climbed to around 4,000' asl and also explored some lift downwind of the site during his flight.  The initially light wind slowly veered into the W and strengthened to become light to moderate, but this allowed those taking off later in the afternoon to enjoy some wave enhanced hill soaring with John Tayler in the Astir climbing to around 3,600' asl.  Dave Campbell, solo  in KLW and Ian McFarlane solo in the DG500, while not climbing as high, contributed to the 6  flights to exceed 30 minutes as they concluded  the day's flying.  The Falke had a couple of sorties and HETI, the new Eurofox, now with a permit to fly, was also flown by a number of tug pilots eager to convert to this, the newest member of the club fleet.  An isolated shower mid afternoon did not restrict the flying but did produce a very bright and colourful rainbow complete with a secondary bow as shown below. 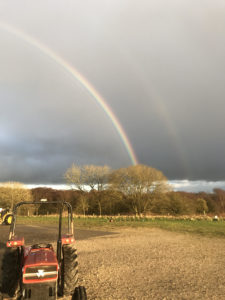