Wednesday 2nd.  A sunny start to the day was followed by increasing cloudiness as a warm front approached from the SW,  the mainly S'ly wind increasing from light to moderate to moderate.  15 ATs resulted off runway 20, with 5 private owner launches and 3 First flight pupils among those flying.  Some convection and hill lift on the southern ridge generated 9 flights of over 30 minutes and one of over an hour, with Slingsby week visitor Andrew Jarvis having 2:05 in his Oly 463, proving there's life in the old dog yet (with reference to the glider of course).  The 3 first flight pupils averaged 34 minutes in air, while Les Rayment/Ray Simpson had 51 minutes in the DG500 and Bruce Grain/Tony Wiseman had 50 minutes in K21 KLW.  Sue Aherne had the only solo flight in a club glider, having 20 minutes in the DG303 while the Falke contributed a single sortie as it was flown around the Pocklington/Rufforth local 100km triangle. 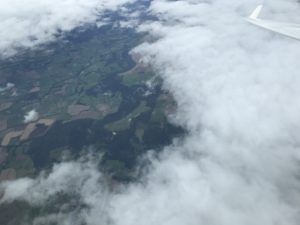 Friday 4th.  The wind had become a little more southerley, varying between the SSW and WSW but was still moderate or moderate to fresh, so operations were again off runway 24 into a sky that again promised wave.  The first two flights were ATs behind Pawnee Tango Mike for first flight pupils, but thereafter, the launches were by winch, with two self launches by Les Rayment and Derek Smith in their DG808.  Of the 19 winch launches, 9 climbed in wave to at least 4,000'asl with 5 climbing above 8,000' asl,  Paul Whitehead in his Ventus climbing to 10,700' while also doing a 198 km cross country with TPs at Barnard Castle and Garforth, although the continuation of the parachuting exercise at RAF Topcliffe put others off cross country flights.  Getting into the wave was a little more difficult that on the previous day, Paul for example spending 2 hours on the ridge before contacting the wave and while  Paul reported moderate climb rates, George Rowden in his LS8-18 had a spell of 8-10 kts climb rate while passing 6,000' on his way to a peak altitude of 12,000', at which point the climb was abandoned due to no O2 availability.  3 other pilots climbed to above 8,000' asl, these being  Bob Calvert, (9,200') in the Discus and  Bruce Grain/Keith Davey (8,200') in K21 KLW, while Tony Dury took his DG303 up to over 13,000' to claim his Gold Height, so congratualtions to him.   Syndicate partners Les Rayment and Derek Smith both had climbs in their DG808, with Les getting to 5,400' and  Derek getting to 10,900' after earlier in the day climbing to 5,800' with C Atkins in the DG1000.  Bruce Grain's flight with First Flight pupil A Hill  in the DG500 was the only one to fail to exceed 30 minutes, with 10 of the day's 21 launches exceeding an hour, Paul Whitehead's 5 hours being the longest on another good wave day at Sutton.