Tuesday 25th.  Another named storm, this time Francis, brought strong ESE to SSE'ly winds which gusted over 50 kts and copious rainfall, 32.3 mm falling over the day, so there was no flying.

Wednesday 26th.  The aftermath of storm Francis was a dull, overcast day, the light N'ly wind bringing in showers.  However, the low cloud base was the main reason for a non-flying day.

Thursday 27th.  A bright start to  the day proved to be temporal as low cloud and rain quickly spread in as a light to moderate ESE'ly blew, so there was again no flying with rainfall totals reaching 8.6 mm.

Friday 28th.  Another depression with its accompanying fronts delivered a further 18.1 mm of rain over the course of the day, the N'ly steadily increasing to become moderate to fresh with 25-30 gusts. So another non-flying day.

Saturday 29th.  Rain, apart from that delivered by a few light showers was not a problem, but the moderate to fresh and gusty  N'ly was, as was the low overcast that prevented any flying.

Sunday 30th.  The wind was still essentially N'ly but had decreased in strength to become light to moderate and while the day was mainly cloudy, the base was high enough to allow flying.  with 23 ATs off runway 02 flown.  The cloud broke sufficiently during the afternoon to allow some convective activity, allowing visitors C Bessent and Phil Morgan in their Janus to have a flight of 1:34, with 6 other flights having 30 minutes or more.  One of these was again flown by Bessent and Morgan, with 2 other private owners of the 5 who flew on the day being in this group, specifically Duncan Pask in his LS10 who had 56 minutes and Toby Wilson in his Std Cirrus who had 32 minutes.  The other >30 minute flights were John Carter and Bill Payton who had 36 minutes in K21 JVZ and Graham Evison and Graham Hayes who had 31minutes in the same glider.  The return of flying was also appreciated by the visitors to the club who were attending the annual Slingsby week and bringing a touch of colour to the skies above Sutton Bank.

Monday 31st.  A very welcome ridge of high pressure brought light winds that slowly backed from the NW into the ESE over the course of the day and, importantly, some very good soaring conditions.  The latter were appreciated by all, but particularly by the club's soaring pilots with the day's total of 50  launches including 38 for private owners.  Conditions over Yorkshire were very good with 5,000' cloud bases and strong thermals, but further south, areas of spreadout resulted in abandoned tasks or tricky conditions.  Derek Taylor in his ASW22 flew 429 km after abandoning his southward journey after passing Tuxford Junction, but on returning to North Yorkshire continued up to Barnard Castle.   Rob Bailey, flew 308 km in his ASG29, with TPs at the Tontine and Horncastle while Andrew Cluskey  flew 232 km in his Shark with TPs at Beverley and Knaresborough but had to abandon his attempt to get to Kirby Stephen Station at Leyburn.  Bill Payton, flying his DG1000 solo did an E-W transit of the North of England with TPs at Guisborough W. Snainton, Stanhope and the centre of the Lake District,  Darren Lodge flying his LS8-18 covered 241 Km with TPs at Goole, Thirsk and Pontefract, Chris Booker in his LS1 flying a similar task and Nigel Burke in his DG808 flying a variation with TPs at Pocklington, Goole, Burn and the Tontine.  Toby Wilson in his Standard Cirrus flew 221 km with TPs at the Humber Bridge, Pickering and Rufforth South, while Kestrel 19 pilots Greg Corbett and Kelly Teagle flew 160 and 132 km respectively.  The day was to the liking of the Slingsby Week visitors, but it wasn't all plain sailing with Andrew Jarvis landing out in his Swallow.  The day also saw the club 2 seaters venture cross country with  K21 JVZ and the DG1000 visiting Helmsley and Boroughbridge.  In all, 31 of the day's launches led to flights of between 1 and 6 1/2 hrs with a further 6 between 30 and 59 minutes on a very welcome flying and soaring day at Sutton.

Tuesday 1st September.  The area of high pressure  was still  in position over the UK so another good soaring day resulted, the wind remaining light to moderate, although varying between SSW and SSE.   Local convection didn't get going until after midday, but thereafter, the queue of private owners steadily diminished as they set off on various cross country tasks.  The longest of these was by Paul Whitehead in his Ventus, covering 365 km with TPs at Belvoir, Tuxford Junction and Bottesford, with a number of other pilots completing 300+ km tasks.  These included Derek Taylor, 325 km via Pickering and Stickney Bridge, just north of Boston, in his ASW22, Rob Bailey, 308 km via the Tontine and Horncastle in his ASG29, Andy Wright 304 km with an O/R to Belvoir in his Nimbus 3, and Andrew Cluskey 302 km with TPs at Kirton in Lindsey, Helmsley and Goole.  A high cloud base, reaching 6,000' asl in places, good energy lines and strong lift contributed to high handicapped cross country speeds, with Derek Taylor achieving 87.1 kph,  Paul Whitehead, 84.5 kph, Rob Bailey 82.7 kph and George Rowden 82.1 kph in his LS8-18 as he flew a 198 km task with TPs at Pontefract, Beverley and Snainton.  Other cross country flights saw Martyn Johnson cover 172 km around the Humber Bridge and Burn in his DG600 and Les Rayment visit the same TPs plus Malton in his DG808.  It wasn't all plain sailing, however, as patches of spread out contributed to two landouts, Darren Lodge landing out at Rufforth while attempting the 172 km Humber Bridge, Burn task and Bill Payton and Albert Newbery landing our near Pontefract in their DG1000.  Sutton Bank was also the place for a land out for Johnathon Richardson who arrived from Pocklington in his ASW19, later taking a AT back to Pocklington. the Eurofox carrying on to retrieve Darren from Rufforth.  Private owners were not the only cross country pilots on the day, with Bob Calvert taking the DG303 south east to inbetween Driffield and Beverley in his flight of 1:48, while other flights in club gliders stayed local, visitor Ken Porter having 1:20 in the Discus,  Naomi Kennard having 1:10 solo in K21 JVZ and Bob Beck and Tony Wiseman having 1:01 in the DG500.  In all, the day resulted in 21 flights of between 1:00 and 4:33 and a further 6 between 30 and 59  minutes, while 2 first flight pupils were given a taste of gliding off the first 2 launches of the day.  The day was also notable for the welcome return to duty of Pawnee Tango Mike which shared the tugging duties with the Eurofox, a photo of the currently available club tugs being shown below. 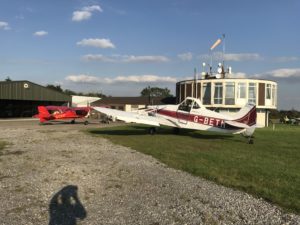