Sunday 13th.  A moderate to fresh at times WSW'ly brought a good hill and wave day, albeit a blue one, with 9 ATs and 23 winch launches flown, enabling many pilots to venture vertically and horizontally.  Chief of the horizontal venturers was Paul Whitehead in his Ventus who flew 422 km while visiting Staindrop, Harrogate North,  Hesket Old Town (between Penrith and Carlisle) and Garforth , while Derek Taylor in his ASW22 flew 366 km on what he described as a grand tour of Yorkshire, also getting to the 2nd highest altitude of the day, 18,100' asl.  This was just 700' lower than the highest of the day, 18,900' asl flown by visitors Richard Maskell and Phil Atkin in their Duo Discus who left the climb while still going up at 3 kts over Northallerton.  The day produced 10 other climbs to above 10,000' asl.  These inlcuded 16.800' by Martyn Johnson in his DG600, 13,800' by Andrew Watson in his ASW20, 13,100' by both Paul Whitehead in his Ventus and Nick Gaunt in his LS7, 12,000' by Bill Payton flying his DG1000 solo, 11, 500' by Brian Wise and Chris Ogden in the DG500, 11,100' by by Jesper Mjels flying the DG1000 solo off the last flight of the day, this flight taking 56 minutes, 10,800 by Brian Wise again in the DG500 off the penultimate flight of  the day this time with Tomasz, 10,600 by Steve Ogden in the Astir, and 10,500' by Tor Tavener in his ASW20.  In addition another 6 flights climbed to between 5 and 10,000' asl. including one by Bruce Grain and ATC cadet Howard, who took off,  climbed to 6,800' and landed after 36 minutes. These vertical journeys were matched by a number of horizontal journeys,  for in addition to the flights of Paul and Derek,  the following TPs were among those visited  by a number of pilots: Durham, Pontefract, Barnard Castle, Pateley Bridge, Wetherby, York, Richmond, Catterick, Masham  and Ripon.  During the late afternoon, the wave came in phase with the hill enabling an easy transition from the latter to the former.  Nick Gaunt took the following photo of Kinsley Crag   from 8,000' while flying his LS7 on a day described as cracking by a number of pilots. 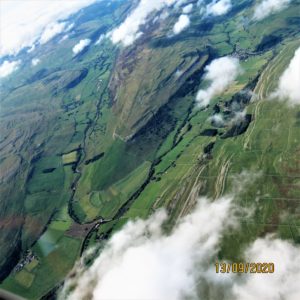 Monday 14th.  A warm and sunny day with a light to moderate SSE'ly blowing saw a busy launch point but little in the way of soaring.  The busyness resulted from 24 ATs behind the YGC Eurofox and 17 behind the Rufforth Eurofox, the latter being used for Tug Pilot validation for 2 Rufforth Tug pilots under the watchful eye of Paul Whitehead.  This latter exercise involved 3 YGC members providing gliders to tow, Tony Drury in his DG303, Arthur Docherty in his ASW20 and Phil Atkin/Andrew Watson in their ASW20.   As noted earlier, soaring opportunities were limited with most flights under 30  minutes.  The exceptions were John Carter and Clive Swan in K21 JVZ with 33 minutes, Chris Thirkell with 34 minutes off his first flight of two on the day in his LS10 and Stephen Hunt who had an hour in his ASG29, climbing to around 4,000' and doing an O/R to Foston.  Although not a red letter day for most, it was for Dave Thompson who went solo in JVZ, following this up with a second solo flight, so well done to Dave.

Tuesday 15th.  Another warm and sunny day with little in the way of lift, so the 20 ATs off runway 20 into a light SE'ly all led to extended circuits, the nearest anyone came to a 30 minute flight was that by John Tayler and Ron Beezer in the DG500 which lasted 29 minutes, the result of a tow to 4,000'.  The day's 5 First Flight pupils had a pleasant introduction to gliding and the Falke had 2 flights, while the longest acheived by a solo pilot was Keith Davey's 18 minutes solo in K21 KLW.

Wednesday 16th.  A moderate N'ly slowly veered into the NNE and became light, but brought in a low overcast from the North Sea, so there was no flying.

Thursday 17th.  A light to  moderate wind varying between ESE and SSE meant operations off runway 20, with Clive Swann's Slingsby Kestrel  providing the only private owner launch to go alongside the 10 for the club's 2 K21s.  Andy Evans was the only other solo pilot, flying K21 KLW for 15 minutes.   Starting sunny, a cloud deck at around 1500' QFE developed quite suddenly during the morning but equally suddently disappeared  without inconveniencing flying.    Flight times were those of extended circuits, typically 12 to 25 minutes, with only Ian McFarlane/First Flight pupil Paul Lockwood'd Mile High flight of 36 minutes being an outlier.  John Holder, one of the three other First Flight pupils of the day, enjoyed it so much he had 2 later flights. generating a total flying time of just over an hour.   Maintenance on  the Eurofox meant most of the day's towing duties were undertaken by the Pawnee, but an instrumentation failure on the Pawnee late in the day meant the Eurofox did the last tow.  Following the end of glider flying, John Tayler's Super Cub did some touch and go flights while the hangars were being repacked.