Saturday 5th.  A moderate W'ly blew all day with a mixture of ATs (5) and winch launches (19) off runway 24, plus 2 self launches.  The result was 12 flights of between 30 and 59 minutes and 8 in excess of an hour, resulting from hill and  thermal lift.  Darren Lodge in his LS8-18 was second to launch and remained aloft for just over 4 hrs, with Chris Teagle in his Kestrel 19 having 3:12.  The day saw the end of Slingsby week and the start of a visit from the Stratford GC, with one of its  members, Andy Balkwill, soon off the mark as  his flew  his LS8-18 for just over 2 hours. The remaining pilots who soared for over an hour were John Ellis in his DG808 (1:48), Ian Bullous in  his DG800 (1:31),  Michael Morgan in the Discus (1:23), Conrad Thwaites in  the Discus (1:13) and Simon Altman in the Astir (1:11).  None of the day's two seater flights breached the 1 hour, with Ian McFarlane/Chris Mandzlitz's 40 minutes in the DG500 getting the closest.  Slingsby week had provided a mixture of soaring days and organiser Jerry HN summed up the week's activities thus:

Slingsby Week 2020 started on 29th August under Covid 19 restrictions. Despite these restrictions we welcomed 8 vintage gliders half of which were Slingsby machines.  So that in itself could be regarded as being a success!  Two Swallows, a Skylark and a Dart were joined by two Olympia’s a 463 & a B2 as well as a Ka6 were received at Sutton Bank by four resident classic machines, the Swales SD3-15T, a  Standard Libelle and two Cirrus’s.  Our visitors came from as far afield as Portmoak,  South Downs, Dunstable, Shalbourne, Darlton, Anglia and Nene Valley. The event attracted attention from the local press as well as members of the public on the Cleveland Way footpath. We didn’t have the 8-10 thousand spectators of the 1930’s but there were quite a few watching & the Yorkshire Post ran a picture article featuring the colourful vintage gliders at Sutton Bank.  The social scene was obviously severely restricted but a “Covid Bar” was run most evenings and the café was open for meals throughout the day.  As befits a Slingsby Week, Henrietta (a mechanical chicken) the “Slingsby Chick” put in an appearance. Henrietta is awarded on a daily basis to a participant during the week for some notable event. Fittingly, her first outing this year was to Andrew Jarvis, the President of the Vintage Glider Club, who landed out at Osgodby at the bottom of Hood Hill some 1.5km from the clubhouse!  A candidate for the “Au Vaches” trophy perhaps?  Bottles of wine were awarded in the usual manner for the most effective efforts at a task, longest or highest flight, etc. The shortest vintage glider flight was 11 minutes & the longest 4 hours 10 minutes.. Amongst the tasks were such novelties as the Slingsby Sling (O&R to Kirkbymoorside-visiting the former Slingsby Works), Monks Habit (visiting local abbeys), and other none too onerous tasks. The object was to fly & have fun and this was achieved.   Same again next year anyone?

Sunday 6th.  A cloudy day with a light WNW'ly wind had an early finish just after midday as it started to rain, this continuing for the rest of the flying day.  The morning's flying amounted to 12 ATs off runway 24 with landings being on 20 or 06.  With no useable lift under the cloudy skies, flight times were in the range of 15-24 minutes,  so the 2 First Flight pupils and the 6 members of the RAF who flew did get a taste of gliding if not soaring.

Monday 7th.  A depression had draped it warm front over the UK, so a cloudy, wet day resulted with 8.1 mm of rain falling, as the initially moderate to fresh S'ly wind veered into the west.  Consequently, there was no flying.

Tuesday 8th,   Following the passage of the warm front, the UK was in the warm sector of the depression and a cloudy, humid but dry day resulted, as a light to moderate to moderate SSW'ly blew, this slowly veering into the W.  Initially, the cloud was on  the hill but rose to around 7-800' QFE, the virtually 8/8s cover revealing the presence of wave.  This tempted a number of pilots to launch, although the conditions meant that only those with cloud flying experience did so.  The signs of wave were confirmed by the subsequent flights, with climbs to between 8,000' and 19,300' asl by the 7 pilots who launched.  Thus Jesper Mjels reached 19,300',  John Ellis 18,700', visitor Barry Kerby 17,600', Martyn Johnson 10,900', visitor Barry Monslow  10,700' and Fred Brown 10,400', all asl.  Later in the day a wave slot opened over the site and two  DG1000s launched, Dave Watson and Malcolm Morgan in the club DG1000 being back on the ground after 36 minutes, including a climb to 4,700' asl as the slot closed and Albert and Martin Newbery's DG1000 remaining airborne for 2:31 and climbing to just over 8,000' asl.  Wave cross countries were again limited by the parachute exercises at nearby locations  but Darlington, Leyburn, Northallerton, Ripon, Knaresborough, Boroughbridge, the Tontine and Whitby were among the places visited.

Wednesday 9th.  The passage of a cold front in the early hours left the site in a sunny, but moderate to moderate to fresh NW'ly, this showing a tendency to back into the WNW.  An initial AT off runway 24 by Chris Collingham and Ron Beezer led to a decision to suspend flying due to turbulence on the take off run.  However, conditions quietened down and just after midday Martyn Johnson took off in his DG600 and was followed by 9 other flights.  However, the last of these, Fred Brown in his Ventus,  again reported very turbulent conditions on take off, resulting in flying being abandoned for the day.   Apart from the early flight by Chris and Ron, only one of the subsequent flights, that by Chris and Frank Bradley in K21 KLW, failed exceed 30 minutes, with the vast majority having 2-3 hours, with most of these climbing in wave.  Jesper Mjles, self launching in his DG400, reached 12,400', Barry Kerby 11,500', Martyn Johnson 10,700', Barry Monslow 9,300', Fred Brown 8,800',  Arthur Docherty 8,200' and Toby Wilson 4,800'.   With the continuing parachure exercises, wave cross countries were again limited, with the Tontine,  Leyburn, Northallerton, Boroughbridge, Ripon and Catterick being among the places visited.  Meanwhile, back on the ground, Dick Cole was putting the final touches to HETY, the latest member of the YGC tug fleet, with only the receipt of the permit to fly from the LAA standing required before the commencement of tugging duties.  Thanks are due to Dick, Ian, John, Jim and Nigel for contributing to the more than 350 man hours required to get HETY, shown below, ready to fly. 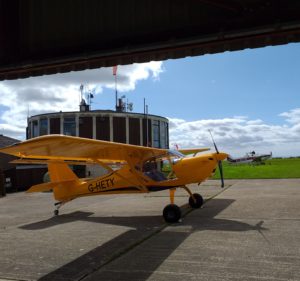