Friday 18th.  A light to moderate ENE'ly blew all day under sunny skies, so operations were off runway 06, with 12 ATs flown, 4 of which were for First Flight pupils.  One of these, Ian Sampson, flying with Dave McKinney in K21 JVZ had the longest flight of the day, 32 minutes off a Mile High tow, clearly demonstrating the lack of any lift under the anticyclonic conditions.    All the flying was in the two club K21s with no one tempted to fly solo on a very much extended circuit day

Saturday 19th.  Another sunny, anticyclonic day with the wind now a light to moderate/moderate ENE'ly, so runway 02 was the favoured choice for the day's 21 ATs.   K21s JVZ and KLW were the  only club aircraft to fly, with Dave Thompson continuing to add to his solo hours with a further 3 launches and Andy Tyas also having a solo flight in JVZ.  However, lift was hard to come by, with the three private owners who flew having mixed fortunes and no one flying a club glider managing to stay up for more than 25 minutes, this honour falling to Kelly Teagle and Sarah  Stubbs in JVZ.  John Ellis,  self launching in his DG808, decided to see whether the cliffs on the North Yorkshire coast were working.  Using his engine to get to them just south of Saltburn, he found they weren't and returned to site via another engine burn after a flight of 1:06.  Duncan Pask, flying his LS10 stayed local and had a 45 minute flight, but right at the end of the flying day, Bill Payton, after having taken most of the day to remedy a flat tail wheel, took a high tow in his DG1000t and contacted wave, eventually climbing to over 6,000' asl.  Bill found the most consistent lift over Farndale, but some also over Raisdale and Ryedale, so after having had his best climb over Farndale, flew back to site to see if there was any wave downwind.  In spite of some clouds in the place the lift should  have been, no lift was found, but on a slow descent  in preparation for a return to site, he found some lift to the north of the site over Kepwick, before eventually arriving back at site after a flight of 2:43.  The day also saw the club visited by TV's Hairy Bikers who came to do some filming near the White Horse for a new series of TV programmes.  Needing to do some drone shots of them above the White Horse for the programme, flying was suspended for a brief interval to allow this to take place.  A couple of photos to mark the occasion of their visit are shown below. 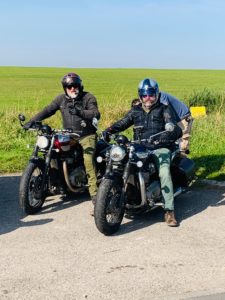 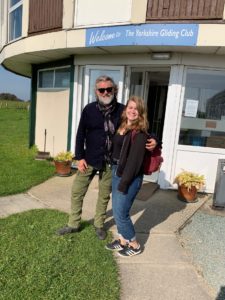 Sunday 20th.  The anticyclone remained in charge of the UK weather and Sunday saw wind conditions resemble those of  the previous days,  the initially light to moderate NE'ly slowly backing into the E over the course of the day.  A significant change was, however, cloud amounts, with a low overcast limiting ATs to around 1200' QFE.   Glider flying was limited to 4 launches, with Dave Thompson having 2 with John Carter in K21 KLW to start off the day, and then following those with 2 solo flights in the same glider.  Initially, off runway 02 a switch to runway 20 was made as the wind veered.  The 4 glider launches were matched by 4 flights in the Falke, an O/R to Carlton featuring in at least one of these.

Monday 21st.  The anticyclone has started to decline, but the cloud of Sunday  had given way to sunny skies, the light to  moderate S'ly wind slowly veering into the W.  The promise of some thermal and later hill lift persuaded 4 private owners to fly but only Martyn Johnson in his DG600 managed a soaring flight,  having just over 2 hours, while Bob Calvert in the DG303 had just over an hour.  Martyn's 2 hours were spent doing extended S turns in the main bowl at between 400-700' QFE, a challenge he apparently enjoyed.  The only other pilots of fly for more than 30 minutes were Sue Aherne in the DG303, 37 minutes,  Steve Ogden in the Astir, 36 minutes and Bruce Grain and one of  the day's 4 First Flight pupils,  with 34 minutes from their Mile High flight.

Tuesday 22nd.  A sunny morning again prevailed as a light to moderate SSE'ly blew, runway 20 being the one of choice.  The first two flights found very poor horizontal visibilty and this, together with low cloud forming around 800' QFE, led to a break in operations.  After around 45 minutes the conditions were considered to be acceptable and flying resumed, with the horizontal visibiiity, although improved, still moderate.  Flying continued off runway 20 until the middle of the afternoon when a wind shift into the SWm plus an increase in strength to moderate, caused operations to be switched to runway 24 and the winch deployed.  This proved to be of dubious benefit as  problems with the winch delayed its use until late afternoon, by which time an approaching cold front had lowered cloud base to 500' QFE, so after one winch launch, flying terminated for the day.  Previous to this, 16 ATs were flown, 6 for First Flight pupils, the later ATs being restricted in height as the very inderterminate cloud base lowered. However, the change in wind direction and speed led to the hill working from around 1300 hrs resulting in  5 flights having over an hour.  These were, visitor Graham Morris with 2:51 in his ASW27, Martyn Johnson, 1:58 in his DG600, 1:27 by Colin Troise solo in the DG500, 1:21 by Nick Gaunt in his LS7 and 1:05 by Frank Bradley in the Astir.   The next longest was 41 minutes by Bruce Grain and Robert Wood in the DG500.  The whole of the main ridge to Paradise Farm became soarable and there were even some weak thermals to use on a murky day at Sutton.