Saturday 8th.  A light to moderate NNE'ly blew all day with operations off runway 02, the launch point being to the west of the winch track.  A low inversion and generally blue skies restricted soaring opportunities with only one flight over an hour and one further one over 30 minutes.  The >1 hour flight saw Rob Bailey explore hill soaring on the north edge of the North Yorks Moors from Hasty Bank to Cringle Moor.  His 1:27 was mainly spent at hill top level, with Hasty Bank providing the best lift,  but the flight back to Sutton required the use of the engine of  his ASG29.  Duncan Pask's flight of 47 minutes in his LS10 was also extended by  the use of his engine, with the best durations of unpowered flight being by Jamie Quartermaine and Tomaz R, 23 minutes in K21 JVZ and the 22 minutes by Graham Evison flying JVZ solo.

Sunday 9th.  Little had changed synoptically from Saturday, the light to moderate wind now being from the ENE, so operations were again off runway 02,  the lanch position being the same as on Saturday.  Sunday was the first day of  YGC's Task Week, with Task Week Director George Rowden setting a Beetle Drive based task in which pilots had to visit TPs sketching out the shape of a Beetle, inlcuding 2 eyes, 2 feelers, 6 legs and a tail..   5 of the 10 launches of the day were by pilots attempting the task, but the low cloudbase, around 1800' QFE, and very broken lift meant no one even made it to the start.   Flight times were in the range 13-30 minutes for pilots attempting the task, the latter time by Les Rayment in his DG800, Les exploring to just this side of Boroughbridge in search of wave.  Les' time was not, however, the longest of the day, as off the first launch, Bruce Grain and Dave Thompson took the DG1000 for a spinning excercise.  Starting the excercise at 4,000' QFE,  they were the only flight to record a thermal climb and were in the air for 40 minutes.  There were two other major happening of the day the first of which was Chris Booker's birthday, with Chris being presented with a glider themed cake made by Toby Wilson, as the following photo shows. 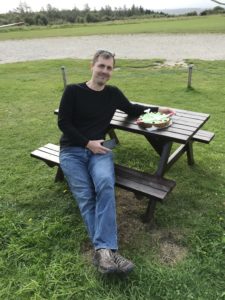 The second major happening saw Bruce Grain take Jerry HN's Swale glider for a test flight, this being the first time it had flown for quite a while.