Saturday 15th.  A light E'ly brought in a low overcast that remained in place all day preventing any glider flying.  However, the Falke had 2 flights for P2 circuit practice, with the cloud base around 600' QFE.

Sunday 16th.  The wind had become a light to  moderate N'ly, but the low cloud remained, this time accompanied by rain, with 9 mm accumulating over the 24 hours, so there was no flying.

Monday 17th,  Another day of low cloud and rain, the latter starting in the early hours and lasting until midday, with a further 6.1 mm falling.  The light W'ly backed into the ESE in the late afternoon, heralding the arrival of a clearance, but this was too late to allow any flying.

Tuesday 18th.  Rain commenced around 1030 hrs and lasted until 1600 hrs, 4.8 mm falling as the wind, initially from the SSE, veered into the W, remaining light to moderate.  Another non-flying day resulted.

Wednesday 19th.  Yet another non-flying day as a light to moderate SE'ly slowly increased in strength to become moderate, with light rain intensifying from around 1700 hrs to give an accumulation of 5.3 mm.

Thursday 20th.  High wind warnings related to storm Ellen led to the cancellation of  most of the public First Flight operations which had been planned to be resumed, but in fact, the day provided a goodly mix of hill, thermal and wave lift and resulted in a launch total of  38.  These were all off runway 20 into a moderate SSE'ly.  The day saw 29 of the 38 launches breach 30 minutes, with 21 of these giving flight times of over an hour.  Rob Bailey had the longest flight of the day in  his ASG29, during which he visited the Thirsk, Doncaster NW and Northallerton but his attempt to revisit Doncaster NW was abandoned due to strong head winds.  He did however climb to around 10,000' asl.  This height was also reached or exceeded by a number of pilots , with Steve Thompson in his Ventus bt getting to 10,900' asl while visiting Ripon, Derek Smith, after abandoning his declared thermal task in his DG808, reaching 11,300' asl during his subsequent wave flight of 4:07 in which he visited Garforth, Hawes and Pateley Bridge and by George Rowden in his LS8-18 who climbed to 10,007' asl in his flight of 4:33,  Some pilots were content to have a thermal flight with Paul Whitehead in his Ventus visiting Goole, Pontefract, Doncaster NW and  Foston in his 4:42 flight, while Chris Booker spent 3:19 flying to Pocklington and Rufforth in his LS1, surviving a low point on the way.  Bill Payton and Stuart Heaton on the other hand used a mixture of thermal and wave to visit Leyburn and approach Pateley Bridge in their flight of 3:25.  Those flying club gliders also took advantage of the conditions with Colin Troise and Chris Thirkell having 2:41 in the DG1000 and Bob Calvert having 2:01 in  the DG303, before Chris Knapp had 1:22 in the same glider.   Sue Aherne took the Discus for 1:14, before Andrew Bedford had an hour in it, and Steve Sanderson had 1:08 in Astir DPO.  After having an hour in his DG303, Tony Drury and his syndicate partner John Marsh flew the DG500 for 1:21. Pilots reported strong, but broken thermal lift with the cloud base eventually rising over 5,000' asl, while those sampling the wave found local hot spots in a confused cloudscape with peak climbs of 4-6 kts.  A photo of the confused cloudscape is shown below. 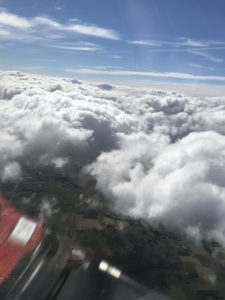