Monday 10th.  A mainly light, E'ly flow was accompanied by variable amounts of thin, high cover allowing plenty of warm sunshine.  However, strong inversions, one below hill top height, meant that there was no usable convection and with the forecast for the week being dire in terms of soaring potential, it was decided to cancel Task Week and return to normal flying activities.  However, Task Week Director George Rowden in his morning briefing did cover the notable events of Sunday's flying and awarded the day's prize of a bottle of wine and winners medal to Toby Wilson, who, while not flying, had made a birthday cake for Chris Booker this being shown below with Chris' car and glider in the background. 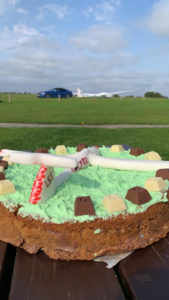 In his "how I did it" speech Toby admitted he had had the help in making the cake, but we didn't find out if he was P1 or P2.  The cancellation of Task Week meant that tasks with the intriguing  titles of Darting About, A Bridge Too Far, Wordy Wanderings, Abbreviated Aviating, Property Pursuit, Majority Leader and Par Avion could not be aired, but there may be an opportunity in September to fly some, if not all of these challenges.  While Task Week was cancelled, flying still went ahead with 7 ATs off runway 20 behind the Eurofox.  Tuggie Dick Cole reported large areas of zero, this being associated with easterly wave, which although not strong enough to provide any climbs above release height, did allow flights to be extended.  Thus Bruce Grain and Roger Taylor had 49 minutes off the last flight of the day in K21 JVZ with Sue Aherne earlier having 30 minutes solo in the same glider and the majority of the rest of the day's flights being in between 25 and 30 minutes.  Interestingly, RAF Topcliffe, close by in the Vale of York, reported a 10-15 kt NNW'ly wind all day.  The day was also notable for the appearence of a Fall Streak Hole shown in the photos below.  Caused by the instantaneous conversion of super cooled water droplets to ice particles in a layer of cloud, the ice particles then coalescing and falling down from the cloud layer, as seen in the photos, the initiation of the effect is often caused by the passage of an aircraft through the cloud. 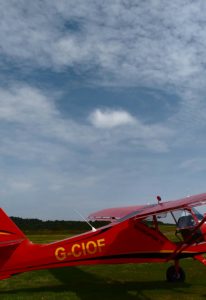 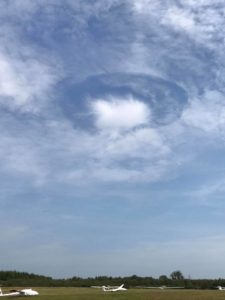 Tuesday 11th.   With little change in the synoptic situation, the ESE'ly flow of increasingly warm air meant it was another non-soaring, but hot day at Sutton, the maximum temperature reaching 27.8C.  The wind at RAF Topcliffe was again from the NNW but went into the ESE around 1600 hrs.   Initially, operations at Sutton were off runway 02, but after a few launches operations were changed to runway 20, the day's total of ATs being 5.  Four of these were equally shared between David Eccles and Tom Altman in K21 JVZ with Albert Newbery flying with David Eccles and John Carter with Tom Altman.  The remaining flight saw Tom's Dad, Simon, have 15 minutes solo in JVZ, with the day's flight times being in the range 10 to 16 minutes depending on release height.  To the above flights was added a single flight in the Falke.

Wednesday 12th.  A slightly hotter day at Sutton, 28.1C, as a now light and variable, but predominately ESE'ly continued to blow, with RAF Topcliffe again reporting a light to moderate NNW'ly all day.  The lack of significant convection meant all but 2 of the day's 16 launches off runway 20 had durations of less than 20 minutes.  The exceptions were Rob Bailey's flight in his ASG29, his 44 minutes relying on weak and broken thermal over the forward ridge, while Chris Collingham and D Machinee's 31 minute flight in the DG1000, was the result of a 4,000' tow during which they flew as far north as the Kepwick ridge , with Mr Machinee undergoing BI training.  Steve Thompson. on the other hand, took five, 1100' tows as he continued with his acclimatisation to his Ventus 2t.  Acclimatisation was also the objective of Jerry HN as he took a flight in his Swales for the first time and followed that up with two more.  It’s always nice to get your first flight in a new type - but this one was extra special. The glider was built locally in Thirsk in 1977 and owned by Jerry’s father until the mid 1980s when it was sold on and “lost” to the family. Subsequently it was only rediscovered when Jerry’s daughter met her future father in law who, it turned out, had owned it for the past 27 years! Of only 5 built, this one is thought to be the last one still flying - and it’s now back in the family and at Sutton where Jerry’s father used to be an instructor.  A happy looking Jerry with the two loves of his life are shown below, with also a photo of Jerry preparing for his first take off. 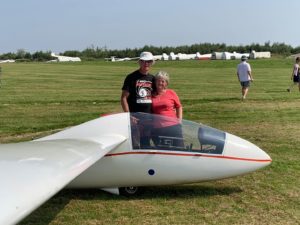 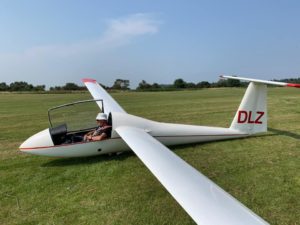 Thursday 13th.  The wind, now a light to moderate N'ly had, overnight, brought in a low overcast and this persisted all day, so there was no flying.

Friday 14th.  Initial low cloud, brought in off the North Sea via a light to moderate N/NNE'ly wind, delayed the start of flying until the early afternoon.  Thereafter, 8 ATs were flown off runway 02 into a unresponsive and stable air mass so that tows to around 2,000' provided flight times of 13 to 22 minutes.  Dave Thompson and John Dore shared the 5 flights in K21 JVZ, Bruce Grain being P1, while Jerry HN had a further 3 flights in his Swales glider.