Friday 21st.  There was no flying as storm Ellen brought 8.6 mm of rain, half of which fell in the early morning and the rest from heavy and blustery showers during the day, as the initially fresh to strong S'ly wind veered into the SW with 40 kt gusts recorded at RAF Topcliffe.

Saturday 22nd.  A showery, initially light to moderate SW'ly airstream didn't dampen flying activities, although a change in wind direction and strength to W'ly and moderate did result in a change in launch method with only 2 ATs off runway 24 before winching took over.  The day's total of 20 launches took advantage of hill, thermal and wave to enable all but 4 of the day's flights to exceed 30 minutes, with 5 exceeding an hour.  Martyn Johnson in his DG600, taking the first of the day's winch launches, was aloft for 3:10, climbing to around 3,500' asl and provided the following photo of a very low rainbow. 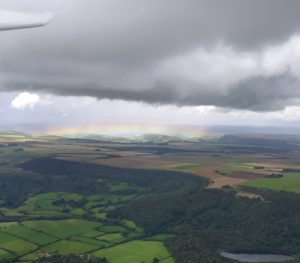 Other pilots exceeding an hours flying time included Bill Payton in the DG303 (1:58), Bob Calvert in the Discus (1:21), Steve Thompson and Charlie Atkins in K21 JVZ (1:20) and Toby Wilson in his Std Cirrus, with 1:15. Bob was the only pilot to contact the wave, climbing to around 7,200' asl, with Bruce Grain and Nora van Genugten having 55 minutes in the DG1000 and Bruce and Ben Haslam having 51 minutes in the same glider.  Nora later had a flight in her own Std Cirrus to raise the private owner launch total to three, while the Falke had 3 flights.

Sunday 23rd.  Another day of showers as a light to moderate W'ly blew, but this time the showers and general cloudiness limited glider flights to 2, with John Carter and Naomi Kennard having circuit practice from  a 1200' tow in K21 KLW  and father and son Albert and Martin Newbery having 25 minutes in the same glider. These flights were preceded by 2 in the Falke.

Monday 24th.  Cloud hugging the hill initially and a moderate soaring forecast didn't augur too well for cross country flying or soaring in general, but the day turned out better than expected with cloudbase rapidly rising, eventually reaching 4,500' asl and good thermal and even some wave to exploit.  The light initially NNW wind slowly backed into the west so operations were off runway 24 and soon the Eurofox was busy launching the first of the 24 gliders on the day, with 11 of these being for private owners.  Two pilots flew 300 km cross countries, Derek Taylor in  his ASW22 covering 310 km with an O/R flight beyond Bolsover,  while Rob Bailey in his ASG 29 flew 308 km, turning the Tontine and Horncastle.  Rob reported blue conditions at times south of the Humber and some wave interference, making the return to site a little tricky.  Indeed after crossing the finish line Rob had to use his engine to get enough height to land, his attempt to regain height using the hill attracting some interest from those on the ground.  Some other pilots also reported contacting wave in the blue and Toby Wilson gained to 5,000' in 3 kts south of Elvington but decided to continue and complete his declared 146 km task around Kirbymoorside, Market Weighton and Wetherby in thermal.  George Rowden after completing a 101 km triangle in his LS8-18 with a start/finish at Sutton Start point W and  TPs at Northallerton, Harrogate North and  Sutton on Forest, then completed another triangle of 107 km around Snainton and Stamford Bridge.  He then went wave hunting near the Tontine and west of Thirsk but in spite of some glimpses couldn't get above cloud base height.  Martyn Johnson in his DG600 went TP collecting, covering 182 km as he visited Catterick, Richmond, Staindrop, Barnard Castle, Pateley Bridge and Ripon while Nick Gaunt in his LS7 visited the Tontine and Humber Bridge, some 192 km.   and provided the following photo. 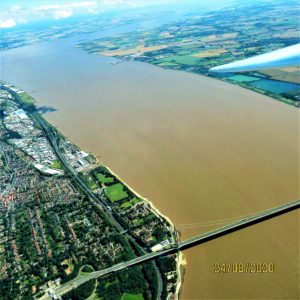 A sea breeze front is visible in the top left hand corner of Nick's photo and did tempt both Nick and George Rowden who, on reaching his Snainton TP, saw the front extending from just inland of Scarborough all the way down to Spurn point in the excellent visibility.  Another pilot to journey to the Humber was Les Rayment in his DG808.  In all, 17 of the day's lauches exceeded 30 minutes with 14 exceeding an hour. Those flying club gliders also took advantage of the conditions with Conrad Thwaites having 1:57 in the Discus, Alan Beaumont having 1:43 solo in the DG500, Sue Aherne having 1:20 in the DG303, Bruce Grain taking a busman's holiday with 1:12 in the Discus and Tor Taverner having 1:01 in the DG303, although he did have 2 flights to accumulate this total the split being 10 and 51.  Husband and wife Tim and Marian Stanley had flights of 1:05 and 1:08 in their ASW19 on a good soaring day at Sutton and this was capped off by the arrival late in the day of the club's new Eurofox, this being trailered up from the south to site by John Tayler and Ian McFarlane. Willing hands made sure the subsequent journey from trailer to hangar was completed safely, with the transfer being likened to the emergence of a butterfly from its chrysalis as the following photos show. 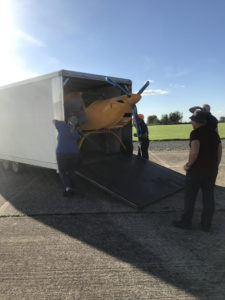 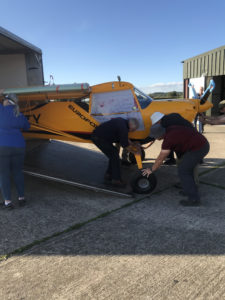 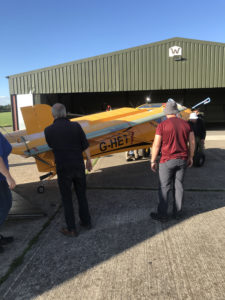 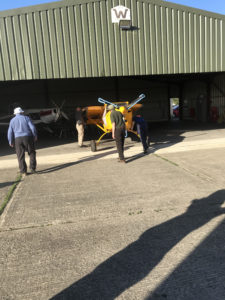 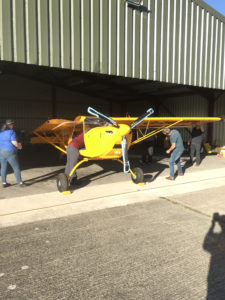 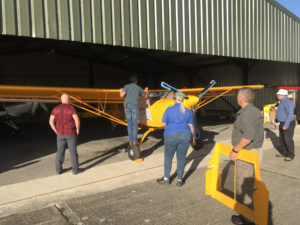 HETY still requires test flying and the completion of paper work before starting her duties but the future mix of tugs for the club is shown in the next photo ie 2 Eurofoxes and a Pawnee. 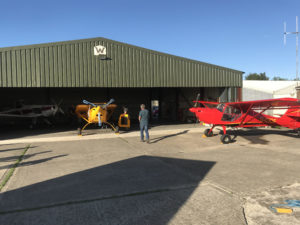