Sunday 12th.  The ridge of high pressure from Saturday was still in place and had intensified, with light winds from the S/SW and plenty of sunshine on the ground.  The result, a reasonable soaring day with a busy launch point and 37 ATs off runway 24, the majority of landings being there too, with the occasional one on runway 20.  Two pilots, Rob Bailey in his ASG29 and John Ellis in his DG808 had over 5 hours flying  time, Rob's task of 287 km taking in the Tontine, Doncaster NW twice, Knaresborough and York, while John flew 196 km around Scunthorpe, Burn and Leyburn, but in a repeat of Saturday's flight, had to resort to his engine after leaving Leyburn. Andrew Clusky had 4:28 in his Shark as he visited Leyburn and Helmsley while among a cluster of 3+ hour pilots, Steve Thompson in his Discus covered 158 km while visiting Burn, Pocklington and the Tontine.  Others in this group included Chris Teagle in his Kestrel who flew the Sut/Poc/Ruf/Sut 100 km triangle as did Darren Lodge in his LS8-18.  Pockington was a popular destination as it was also visited by Les Rayment in his DG800, but Bill Payton and Albert Newbery bucked this particular trend by visiting Beverley, Humber Bridge and Burn in  their DG1000 and Nick Gaunt visited York in his LS7.  Those flying club aircraft also made the most of  the conditions with Ian McFarlane and Naomi Kennard having 1:06 in K21 JVZ late in the day, with earlier, Andy Tyas having 1:51 in Astir DPO and Conrad Thwaites having 1:16 in the Discus.  Among all this activity the Falke had 2 flights.

Monday 13th.  A eastward travelling front brought low cloud and some light rain in the morning, the initial light to moderate S'ly veering into the WSW and becoming moderate to fresh around the middle of the day.   The skies cleared late on in the day but there was no flying.  However, while there was no flying at site, in the deep south things were stirring as Ian McFarlane got started on the assembly of G- HETY, our 120 hp Eurofox.  A summary of Ian's report is given below, together with some photos.

First part of the day was spent preparing the work area; getting all (most!) of our kit assembled into one place by G-HETY, then working through the parts list to check that everything was there.
I have removed the cowlings and checked all of the firewall prep; drilled the hole for the engine management loom and prepared the grommet template. Fitted the engine mount (less the missing bolt). The two bottom bolts are dry fit at present until the engine is in and exhaust brackets can be correctly set.
I tried one fit of the engine in mount to the firewall then discovered that a recent modification Steve is performing fouls the engine mount. He has mounted the rectifier and capacitor fwd of the firewall as they have noted the rectifier runs cooler there than behind the panel. I have modified the spacers to provide a little more clearance but was unable to try a second fit today.
Small change to plan. John T is able to come out next week, so I'll cut my visit short and John will day week 2
Other than basic sensible precautions Steve isn't imposing too much in the way of Covid-19 limitations. There's currently no-one else booked in to work on their aircraft so his current expectation is that we should get everything finished within 4 weeks. 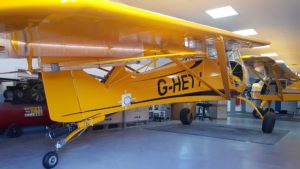 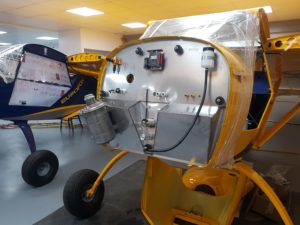 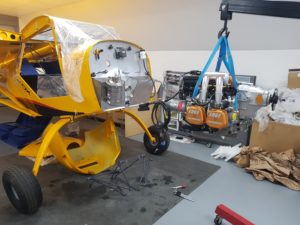 Tuesday 14th.  A cloudy day with a light WNWly flow had limited soaring opportunites and ATs off runway 24 numbered 13, all but three resulting in flight times of less than 30 minutes.  The wind slowly backed into the west and with a little more sun on the ground Rob Bailey was able to have 1:02 in the Discus.  The slow improvement in the weather also resulted in Bruce Grain and Peter Robinson having 33 minutes in K21 JVZ off the penultimate launch of the day while off the last launch, Ron Beezer and Christina Griffiths had 32 minutes in the DG500.
Meanwhile in the deep south.
Main achievement today was getting the engine bolted on and then the exhaust system "first Fix"
The repositioned Regulator was well clear of the engine mounts and I had little problem (even single handed!) getting the engine mounted and bolted and torqued up.
I have mounted the ECU Module which was a bit of a challenge trying to ensure that the multi plug could be connected and disconnected without having to dismount the whole module (the photo will show why)
ECU Loom routed into the cockpit area and the Firewall penetration closed up. Other wiring looms and leads were routed and tie wrapped to the engine mount. I managed to get hold of the exhaust can and headers and all of that is loose mounted awaiting final fit and tightening up tomorrow.
Steve stopped back after hours to work on his camper van; I was invited to stay and do a bit more so I've started on the controls. 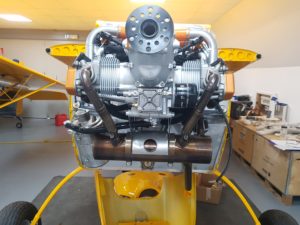 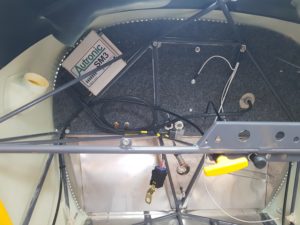 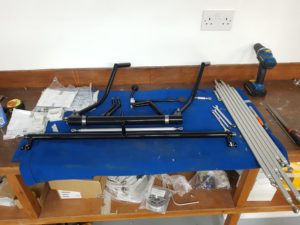 Wednesday 15th.  A slowly moving warm front resulted in a damp and cloudy day at site, 3 mm  of rain falling from 1000 - 1600  hrs.  Consequently there was no flying.
Meanwhile in the deep south.
Another busy day and a lot of painfully slow progress but quite a bit achieved in retrospect.
Finished off dressing up the controls and linkages. The control stick and connection is assembled and ready for inspection.
Final adjustment of exhaust, then everything tightened up; I have put the lock wire on each spring.
I torqued up the lower engine mounts and exhaust hangar bolts with loctitie. Prepared and fitted the two coolant pipes for the radiator.  Made fuel pipes with end fittings, fire retardant sleeves fitted and tightened up for:
Firewall penetration feed to fuel injections system
Fuel injection system to regulator valve
Regulator valve Return to firewall penetration
Installed EGT probes and ran wiring back to firewall penetration.
Ran tubing for coolant filler tank to expansion tank
Ran vaccuum pipe from air manifold to fuel regulator valve
I confirmed that the completion pack is with all of the other paperwork down there.
I fitted the flexible hose from the exhaust heat exchanger to cabin heating control 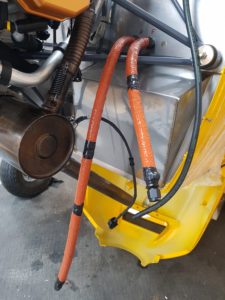 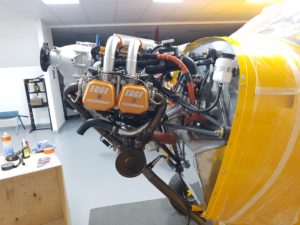 Thursday 16th.  A day of sunny intervals as a light W/WNW'ly blew, resulting in a day of 10 ATs off runway 24, the very soft hill lift being augmented by thermal.   First to take advantage of the available soaring conditions was Sue Aherne, taking the Discus for a 44 minute flight and being followed by Rob Bailey who, obviously not too impressed by the prospects of soaring his ASG29, had 1:39 in the Discus flying locally.  The only two other flights to exceed 30 minutes both had Bruce Grain as P1 in K21 JVZ, first with Sam Powell, 37 minutes and then R Webster, 39 minutes, this being the last flight of  the day.  To add to the fun, the  Falke flew twice.

Meanwhile in the deep south.

Another long day today and apparent progress seemed slow but we're inching slowly closer to completion of the engine installation.
oil system virtually completed,pipes made, routed and connected for:
Oil reservoir to cooler/oil cooler to oil pump/Overflow from oil tank
oil cooler fitted.
Lower cowling has been on and off a lot to get the arrangement right and was successfully fitted and removed twice after final connection of the cooler.  Made, sheathed and connected the fuel regulator valve end for the fuel pressure line. No pressure sensor to fit yet, so it's a bit over length and ready to complete.   I managed to work a bit later again and went back to the controls, focussing on the rudder pedals and loose fitting the main bell crank. I was also shown the aileron bell cranks which leave the factory assembled and were not very smooth in operation. I've disassembled them, reamed the holes, cleaned them up and they're much better. They are reassembled but awaiting inspection before I put new split pins in.  I have a list of things I want to try and get tackled tomorrow and expecting a few hours of Alan's (Quality manager) time which should get me well on track. 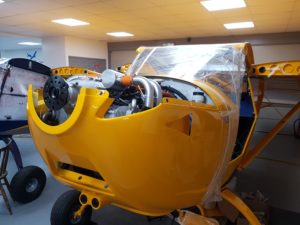 Friday 17th.  A bright start to the day had the trailer park busy in expectaton of a shortened flying day due to the expected arrival of a cold front in the  afternoon.  This proved to be the case as a lowering cloud base and light rain led to the cessation of flying around 1600 hrs with a glut of landings in the period from 13:30 to 14:00 as some early rain fell.  The light to moderate WSW'ly provided hill, thermal and wave lift, but as the afternoon progressed the wind fell more light than moderate, leading to a very soft hill and shorter flights.  The shortest of these saw Les Rayment and Steve Ogden abandon a too fast launch in the T21,  only to find instead of hill lift, nil lift, resulting in a down wind landing on runway 20.  Yes, they packed a lot into 4 minutes.  With wave evident, 19 of the day's flights elected to AT off runway 24, with 13 being launched by winch.  Comparing the benefits of the different methods of launch, 69 % of those taking winch launches had flights of > 30 minutes compared to 74% of those taking ATs.  Not suprisingly, getting into the wave was  easier from an AT  or self launch, with 4 of these flights getting to above 5,000' compared to 1 from a winch launch.   However, Andrew Wilmot in his ASW 19, after taking an AT, lost the wave and finished up on the hill but then, via hill and thermal, managed to transition back into the wave, climbing eventually to 5,300' asl.  Pilots reported weak and localised wave, with no advantage in jumping wave bars to the west, with Martyn Johnson in his DG600 getting to the highest of the day, around 7000' asl.  Jesper Mjels, self launching in his DG400, went the furthest west in search of stronger wave, going beyond Ripon, but could only climb to 6,400' asl.  The other > 5,000' asl pilots were Ron Beezer in  his Nimbus 2 who climbed to 6,900' asl, Steve Thompson in his Ventus, 5,100' asl  and George Rowden who climbed to 6,400' asl  and provided this view of Northallerton from his LS8-18, 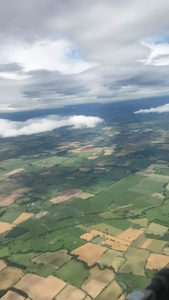 Those flying club gliders, while not contacting the wave, still posted some good flights, with Colin Troise having 2:08 hrs solo in the DG1000, Bob Calvert, 1:31 in the DG303 and Alan Beaumont, 1:08 solo in the DG500.  The day also saw Chris Thirkel take a first flight in his LS10, having recently joined this syndicate with Duncan Pask.

Meanwhile, in the deep south, all was quiet as Ian made his way back home with John Tayler  planning to travel south to continue the assemby of G-HETY next week.