Saturday 19th.  A slowly moving front meant it was a day of low cloud and light rain that lasted from 0900 to 1400 hrs, so there was no flying.

Sunday 20th.  A extension of the Azore's high brought a good soaring day, the wind being light to moderate from the NNW to start, slowly backing into the WNW over the course of the day.  The trailer park was soon busy and by the end of the day, out of the 47 ATs flown, 29 were by private owners.  CFI John Carter and Deputy CFI Bruce Grain got the day off to a flying start, with John having 53 mins with Chris Ogden in K21 JVZ followed by Bruce with 52 mins with Jerry HN  in K21 KLW.  Thereafter a stream of private owners departed on cross countries with only a tendency to overconvection and spreadout causing any problems, although that did include Chris Booker's land out on the way back to Sutton in his LS1, having completed 207 km of his Sutton, Catterick, Pontefract, Beverley task.   Two pilots flew over 400 km, Rob Bailey in his ASG29 who covered 414 with TPs at Tontine, Horncastle, Grantham and the Tontine and Derek Taylor who flew 403 in his ASW22, rounding Alfreton, Masham and Doncaster NW.  A number of other pilots flew 300+ kms including John Ellis in his DG808, 358 km around Tontine and Grantham, David Latimer, 357 km around Sheffield South, Tontine and Pontefract in his Ventus, Andrew Cluskey, 358 km with TPs at Saltby, Sheffield East and Boroughbridge in his Shark and Andy Wright, who flew around Rotherham, Thirsk and Goole in his Nimbus 3, 305 km.  200+ km pilots included the aforementioned Chris Booker, Darren Lodge with 241 km in his LS8-18 with TPs as Goole. Thirsk and Pontefract and Jesper Mjels in his DG400 with 216 km rounding Tontine, Scunthorpe and Pontefract.  Bill Payton flying his DG1000 solo bucked the N/S flights of the above and visited the Lake District.   Locally, syndicate partners John Marsh and Tony Drury flew the DG500 for 1:55 and Colin Troise had 1:40 flying the DG1000 solo, while Conrad Thwaites had 2:16 in the Discus.

Monday 20th.  The Azore's anticyclone was still in place but spreadout was much more extensive as the light to moderate WNW'ly continued to blow.   This was not the principal problem in terms of flying however, as a service on the Eurofox meant there was no AT capability, so the only flying activity was a single sortie in the Falke.

Meanwhile in the deep south.    John Tayler took over from Ian Mcfarlane in the process of assembling the club's new 120 HP Eurofox and his report and some photos are given below.

Slow start as I found my way around and Alan (Eurofox Quality Manager) was at the dentist.  Throttle control and guillotine handle fitted to panel.  Started on fuel system. Firewall aft. Main valve and pipes fitted. Pipes to collector tank fitted and tightened. To be finished tomorrow. 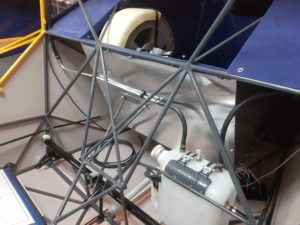 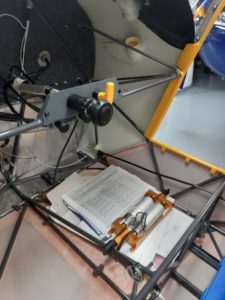 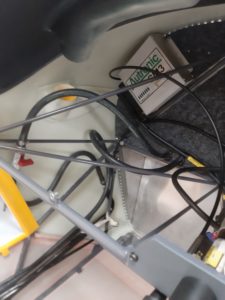 Tuesday 21st.  The anticyclone remained in place, the wind  again light to moderate but slowly backing from the NW into the SW.  A  requirement to complete the service on the Eurofox meant ATing was only available until 1500 hrs, but a slick ground operation meant 37 launches were still flown, 19 by private owners.  A repeat of the weather on Monday saw extensive spreadout which stymied many a cross country plan, and led to some long glides across dead air and multiple in-flight changes of plan.  However, the unstable nature of the airmass did provide some good climbs in places where the sun got to the ground and as a result pilots were able to explore quite a bit of North Yorkshire and in some cases South Yorkshire.  Derek Taylor in  his ASW22 did just that with an O/R to Conisborough Castle while Rob Bailey in his ASG29 visited the seaside at Whitby as well as Market Weighton, Masham and Wetherby.   Chris Booker having a technical problem with his LS1 instead went on a  mutual flight with Bill Payton, the pare flying 142 kms, with visits to Pontefract, Burn and Knaresborough taking some video of the Power stations along the route.   John Ellis, in his DG808 flew 130 km, with TPs at York, Burn and Ripon, and Burn was also visited by Stewart Heaton and Albert Newbery in their DG1000.  Les Rayment visited Pocklington, Market Weighton and Goole in his DG808, while Andrew Cluskey in his Shark explored parts of East Yorkshire, Steve Thompson in his Ventus visited Foston and the Tontine and George Rowden in his LS8-18 covered 162 km visiting local TPs.   Similar to Sunday, John Carter and Bruce Grain demonstrated the soaring potential of the day by having 42 and 44 mins respectively with Tomer Altman and Dave Eccles off K21 flights that took off at 0917 and 0923 respectively, following a 0900 hr briefing, with Simon Altman shortly afterwards having 1:38 in the Discus.  After a check flight with John Carter, Josh Brookes took K21 up for 58 minutes off  the penultimate launch of the day, with Andrew Bedford having 50 minutes of the last launch of the day.

Meanwhile in the deep south.  John Tayler continued with the work on G-HETY with his report and photo reproduced below.

Fuel system finished.Floors cut to size and fitted. For securing tomorrow. Carpets next then control runs. 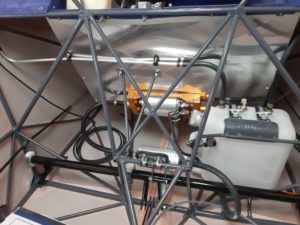