Wednesday 17th.  A light to  moderate N'ly was again accompanied by low cloud that slowly dispersed, with sunshine breaking through in the early afternoon.  The conditions thereafter only tempted one pilot to have a trip in  the Falke.

Thursday 18th.  An increasingly cloudy morning was followed by a wet afternoon as a moderate N'ly continued to blow.  The rain, starting around 1300 hrs, deposited 5 mm over the next 8 hrs so there was no flying.

Friday 19th.  Initially light, the ESE'ly progressively veered through SSE to SSW, increasing to moderate and being accompanied first by low cloud and then by rain from 1200 to 1600 hrs, so it was a non-flying day.

Saturday 20th.  A ridge of high pressure in advance of a active front expected to cross the UK overnight, promised a good soaring day and the trailer park was soon busy as private owners rigged in anticipation.  However, increasing medium level cloud building from the south as a moderate S'ly blew, meant plans for cross countries in that direction were soon abandoned by most pilots, with most of the day's cross country flights making use of the better weather to the NE of site.  One exception was Steve Thompson who, taking off around 1115 hrs, did fly off  the south but ran into the poor soaring conditions around York and landed out at Rufforth,  returning via an AT.   Of the pilots heading NE, Andrew Clusky in his Shark visited Carlton and Danby, the latter TP also being the choice of another pilot, who I have not been able to identify.  Guisborough was the TP of choice for Rob Bailey in his ASG29 and George Rowden in his LS8-18, but while Rob made it back to site via Kirby Moorside, George had to resort to his engine back at the Tontine as he ran into grey skies and  light rain, abandoning his attempt to reach Catterick.  These same grey skies also led to Les Rayment abandoning his flight to the NE in his DG808 around Carlton and returning to site via Helmsley.  The grey skies and weak lift that were the norm during the early afternoon, meant that flight times remained low through this period, but conditions brightened up later in the afternoon, with Malcolm Morgan having 1:17 in Astir DPO, Arthur Docherty having 1:11 in his ASW20, Bill Payton having 1:31 in the DG303 and Nigel Burke having 1:09 in his DG808 having taken off around 1600 hrs.  Another feature of the day were the 5 solo flights in the T21 by syndicate members, Nick Gaunt, Tor Tavener, Jamie Quartermaine, and Duncan Pask, all of whom are present in the following photo. 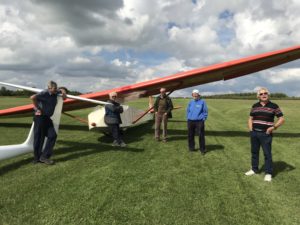 If you want to know what the well dressed T21 pilot looks like, here's a photo by Nick Gaunt of Jamie Quartermaine, seen at the extreme left of the above photo, as he he makes his way to his sturdy steed. 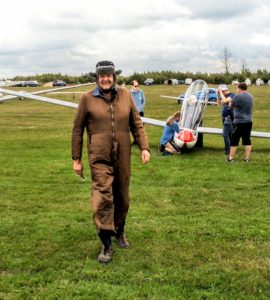 In addition, the day saw the first dual flights in K21 JVZ after the fitment of a perspex screen between the front and rear cockpits to isolate P1 and P2 from each other.  One issue was the difficulty in communication between PI and P2, but this is expected to be resolved by installing an intercom system and apart from a few other minor issues, the modification seems to have worked well.  A photo of the modification is shown below. 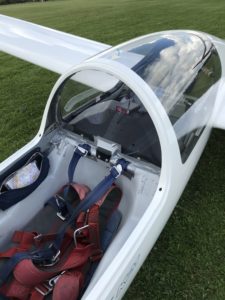