Sunday 7th.  A cloudy, moderate N'ly flow persisted all day, with the cloud thick enough to deposit 3.0 mm  of rain, mainly in the early hours of the day, but lasting as showers until the early afternoon.  Thereafter, the low cloud persisted so there was  no flying.

Monday 8th.  The light to moderate wind was again from the N, though varying between N and NNE.  A generally featureless overcast at around 2,000' QFE allowed flying to commence off runway 02 at 1045 hrs with Mark Newburn taking the first flight in K21 JVZ. The first 8 of the day's 12 ATs found little in the way of lift, with only Alan Beaumont in the DG500 getting to 20 minutes flight time.  However, from early afternoon, the cloud deck became more textured and Steve Thompson in his Discus managed to find a single climb in his flight of 35 minutes.  Conditions continued to slowly improve and George Rowden in JVZ managed a climb to cloud base at 2.500' QFE in his flight of 55 minutes.  The sky now showed significant areas of blue with some indications of wave, and first Mark Newburn in JVZ and then Steve Thompson in his Discus took advantage, with Mark having 1:18 and Steve 1:36, although no wave was found.   Steve also took the opportunity to get to grips with some new instrumentation and practice a little cloud flying, climbing to 4,100' asl.  Other flying activity saw the Falke have 4 flights and John Tayler take his Super Cub for a late afternoon trip.  For others, the day was one of fettling with John Ellis giving his trailer a good polish and Stuart Heaton and Albert Newbery doing some pre ARC preparation of their DG1000 as the following photos show. 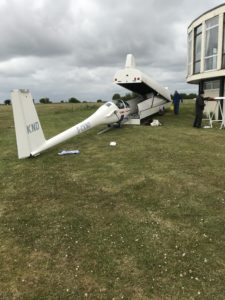 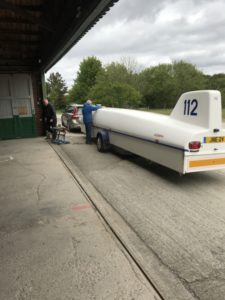