Saturday 30th.  A light ESE'ly blew at the start of the day but steadily increased and backed to become a moderate to fresh E'ly with the result that there was  no flying.

Sunday 31st.  Like Saturday a light wind opened procedings, this time from the NNE before it veered into the E and increased to moderate, these conditions allowing flying to get under way around 1045  hrs but also requiring a change in runway from 20 to 06 around 1400 hrs.  Nora van Genugten took the first 2 launches in K21 KLW but, with no lift available, took the opportunity to get in some circuit practice back onto runway 20.  Soaring started around 1145 hrs as Darren Lodge took his LS8 for a 4:21 O/R to Rufforth during which he climbed to around 6,000' asl, an altitude also reached by both Arthur Docherty in his ASW20 during his flight of just over 2 hours and Toby Wilson who, off the last flight of the day, had 56 minutes in KLW.   Rob Bailey, flying his ASG29 around a 255.0 km task which took in Ullswater and Helmsley, reported a cloud base of over 7,000' asl over the Pennines but widely separated thermals.  Others to have over an hour of soaring included Kelly Teagle in her Kestrel 19 and Jamie Quartermaine in the DG303, the Cumulus containing skies gradually migrating westwards during the day.

Monday 1st June.  A light to moderate NNW'ly again opened the day and again slowly veered into the E by its end.    Cumulus were again in evidence from mid morning but as was observed on Sunday, the clouds progressively migrated westwards during the day resulting in a blue afternoon at site.  5 of the day's 8 ATs of runway 02 were by private owners and all flights exceeded an  hour in duration.  Cloud base was around 5-5,500' asl with a  number of pilots flying cross countries.  Rob Bailey visited Pontefract and Ripon and also flew over the Pennines in a flight of 3:12 in his ASG29, while John Ellis took his DG808 to Pocklington, Rufforth, Wetherby South, Knaresbrough and Ripon, his flight time being 3:40, the longest of the day.  Rob took the following photo over Pen y Ghent as he left the Cumulus for the blue back to site. 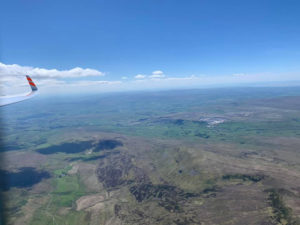 Tony Drury, flying his DG303, visited the Tontine and Helmsley, having just over 2 hours in the air, while Nick Gaunt flew the club DG303 to Carlton and Helmsley.  Andrew Wilmot in his ASW19 and Nigel Burke in his DG808 remained local during their flights of 2:20 and 2:50, local flying being also the plan of Tor Tavener in K21 JVZ and Mark Newburn in the DG500.  Tony Drury has provided the following photos of the day. 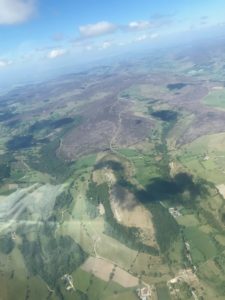 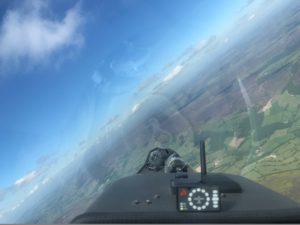 Tuesday 2nd.  A light and variable wind, mainly from the W segment, became a light to moderate N'ly by the end of the afternoon with the result that although all take offs were from runway 24, some early landings were on 20 and  late afternoon landings were increasingly on 02.  Patches of high cover soon moved off to the SE and another warm and blue day resulted, although Cumulus with a base of over 7,000' asl appeared increasingly from mid afternoon as medium level cover arrived from the NW.  16 ATs behind the Eurofox were flown on the day, with the first soaring flight taking off around midday, Alan Beaumont having an hour in the DG500.  Paul Whitehead, taking off around 1330 hrs in  his Ventus t, flew the longest cross country, visiting Burn, Market Weighton, Pocklington and York East in a flight of 3:27.  Rob Bailey visited Pickering, Boroughbridge  and Catterick in a flight of 3:30 in his ASG29, while Pickering was also a TP for John Ellis in his DG808, to which he added Osmotherly and Foston, his flight time being 3:40.  Ron Beezer had the longest flight of the day, 3:55, spending the time visiting Carlton twice and climbing to  a cloud base of over 7,000' asl, this also being acheived by John Ellis, Rob Bailey and Martyn Johnson in his DG600.   Apart from the 4 flights to exceed 3 hours, 2 more were between 2-3 hours  and another 4 were between 1-2 hours on another warm soaring day at Sutton.