Tuesday 26th.  A light to moderate WSW/W'ly blew, with initially cloudy skies slowly giving way to sunnier skies in the afternoon.  Eurofox tows off runway 24 numbered 5, all of them giving flight times of over an hour as thermal and wave provided soaring opportunities.  Alan Beaumont was first off in the DG500, landing after 1:13, with Albert Newbery next off in K21 JVZ his return being afteer 1:12.  Derek Smith, self launching in his DG808 was the first of the day's flights to contact wave, climbing to 7,500' asl in his flight of 2:13, the longest of the day his wave climbing exploits being duplicated by John Carter, who in the DG500, climbed to 7,400' asl in his flight of 1:15.   With cross country flights currently banned, Derek visited the nearby TPs of Northallerton and Thirsk while John took a trip west to the East Coast main line,   Nigel Burke,  flying the DG303 for 1:14, completed the day's glider flights but not the day's aviating as the Falke had 3 sorties.

Wednesday 27th.  Wednesday saw a switch in the wind direction, it now being a light and at times moderate N'ly.   Consequently, operations were mainly off runway 02, but landings were also on 06 and 24.   Some thermal activity enabled 3 of the day's 5 launches to exceed an hour, with Nigel Burke, self launching in his DG808 having 1:30, the longest of the day.   Colin Troise, with 1:07 off the first flight of the day in K21 KLW, with Andrew Wilmot in his ASW20 having 1:05.  Colin Troise had a later and shorter flight in KLW and Toby Wilson took the last launch of the day in his Standard Cirrus.  The day's flying activities were completed by a single Flake flight.

Thursday 28th.  The anticyclone that continued to bring dry weather had now moved off to the NE of the UK, resulting in a light to  moderate SSE'ly flow at site.   Operations, totally 7 ATs behind the Eurofox, were off runway 20, with the aiming point moved down the runway due to drainage works at the northern end.  The conditions, under blue, sunny skies, were stable for the first part of the flying day, with the result that all of the first 4 flights were of the up, round and down variety.  However, the 3 flights taking off after 1400 hrs found sufficient blue thermals to register flights in the 50 minute to an hour range, with Conrad Thwaites in K21 JVZ having an hour off the last flight of the day, Simon Altman having 50 minutes of the penultimate launch of the day in K21 KLW and Toby Wilson having 53 minutes in his Standard Cirrus.   The best heights on the day were around 3,700' asl.

Friday 29th.  The anticyclone continued to move away but still maintained a dry SE'ly flow at site, the essentially blue condiitons providing some transient and isolated Cumulus late in the afternoon.  6 private owner launches contributed to a total of 16 on the day, all off runway 20 behind the Eurofox.  The first 6 launches of the day only contributed one over 30 minutes, this being by Steve Thompson in his Discus who  had 31 minutes, while Tony Drury came close off the previous launch with 27 minutes.  Convection really got going from around  1400 hrs, with 7 of the 11 flights exceeding and hour and another three 30 minutes,  the latter including 2 test flights by Derek Taylor in the DG500 investigating trimmer operation.  6 of the later flights climbed to around 5,000' asl with George Rowden in  his LS8-18t having 2:19, Steve Thompson in his second flight in his Discus, 1:49, Paul and Polly Whitehead in K21 KLW, 1:41, the pilot of the DG808 1:29 and Jon Hart in the second of his two flights on the day, exactly an  hour in K21 JVZ.  Malcolm Morgan, again on a second flight had 1:17 in JVZ, while Toby Wilson had 1:06 in his Standard Cirrus.  Steve Thompson took the  opportunity to search for wave downwind of the site but found none.  As on Thursday, the aiming point on runway 20 was again displaced south from its normal position due to continuing drainage works on the northern end of the runway.  Photos of the work and Team Robinson (including YGC's Ian Barwick) are shown below. 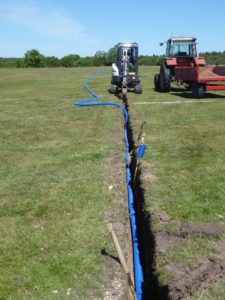 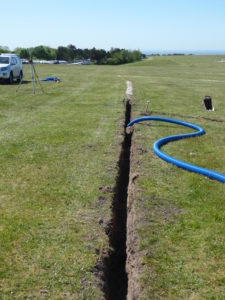 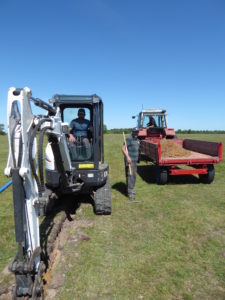