Tuesday 19th.  The anticyclone influencing the weather over the UK  had remained to the SW  so that it was again a day with WSW'ly winds, though they had declined in strength slightly to become light to moderate.  Operations were again off runway  24 and 11 ATs were flown behind the Eurofox.  Fronts moving up the west side of the UK meant it was a cloudy morning at site, with 8/8ths at 1300' QFE, but some variable hill lift and indications of wave allowed George Rowden in K21 JVZ and Nick Gaunt  in K21 KLW to have 49 and 44 minutes respectively.  The skies brightened around lunch time with good clear holes appearing in the the cloud deck, especially to the west, and Bruce Grain had a 1:20 flight  in  the DG500, climbing to 7,600' asl in wave over the A19.  Brian Wise followed in K21 JVZ, climbing to 6,400' asl but having to beat a hasty retreat back from  Thirsk to site, landing  after 1:06 as cloud cover again increased.   Rob Bailey, launching in his ASG29, had the longest flight of the day, 2:22, but remained at relatively low level due to the reappearence of 8/8 cover at around 1500' QFE.  Subsequent breaks on the cloud allowed John Carter in the DG500 and Tony Drury in KLW to AT into these slots and climb to 7,100' and 7,300' asl respectively in their flights of 1:23 and 54 minutes.  Later, Dave McKinney in KLW and George Rowden JVZ had 50 minutes  and 1 hour respectively, but found the wave to be weak, with the slot they were flying in slowly progressing west beyond Topcliffe requiring a high speed descent and return to site.  Martyn Johnson, on the other hand, found consistent wave in a slot over Bagby and eventually reached 12,100' asl before returning to site after 1:40.  The following photos were taken by George Rowden and Tony Drury. 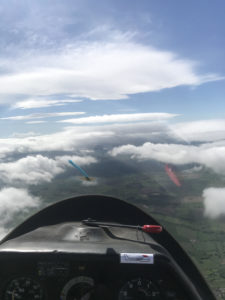 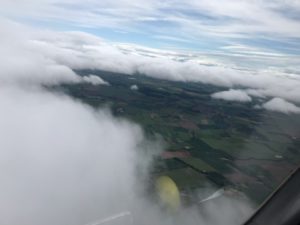