Tuesday 11th.  Storm Ciara continued to dominate the weather as a combination of  frequent showers and  the strength of the  wind,  a fresh and gusty WSW, meant flying was not possible.

Wednesday 12th.  The wind remained in the WSW but had declined in strength to become moderate to fresh, although still somewhat gusty.  However, this didn't stop flying, with winching commencing off runway 24 around 1100 hrs and over the course of the flying day 6 launches were flown, with all but one resulting in flight times of over 30 minutes and 4 being well in excess of an hour.  John Carter and Alan Beaumont, sharing a flight in K21 KLW, took the first flight of the day and found some wave, climbing to around 6,000' asl in their flight of 1:38, the second longest of the day. Some photos from their flight are included below. 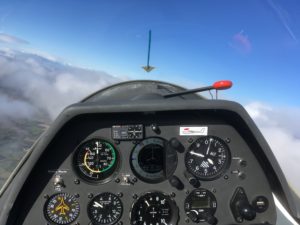 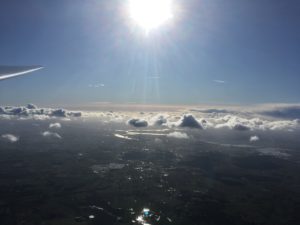 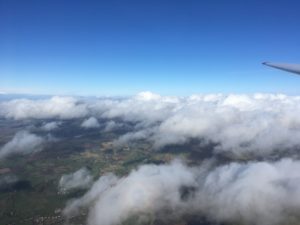 Thursday 13th. 15.5 mm of precipitation in the morning, falling as a mixture of snow and sleet as a steadily increasing ESE'ly blew, was followed by a day of low cloud that prevented any flying.  A late clearance saw the wind decrease in strength and veer into the NW but this was too late to permit any flying and in any case the airfield was too wet for any operations.

Friday 14th. The state of the airfield had not improved by very much, so although the weather was not a problem, a moderate to fresh SSE'ly that late on veered into the SSW and a high cover that slowly thickened and lowered, flying was not possible.

Saturday 15th.  A new named storm Dennis now affected the UK and with a forecast of strong winds and heavy rain, the decision was taken to inform members on Friday that no flying would take place on Saturday.  The forecast was accurate, as the wind speed gradually increased during the day, starting off  as a moderate to fresh SSE'ly and becoming fresh to strong from the S. The accompanying low cloud and rain made for a very wet day with 26.7 mm falling.  In addition to the meteorological barriers, problems with the electricity supply to the club meant that Steve Thompson's talk on field landings, scheduled for the evening, had to be postponed.

Sunday 16th.  Storm Dennis continued to dominate the weather and although the wind had decreased to become a moderate to fresh SSW'ly, another 32.8 mm of rain fell overnight, ceasing around 0800 hrs.  Consequently, the airfield was too wet to allow any operations.  Inspections of the club trailers revealed that one of the posts  onto which a trailer had been attached had pulled out of the ground, allowing the trailer to rotate horizontally.  Fortunately, its restraining ropes had prevented it colliding with the adjacent trailer.  Some of the private owner trailers had also been moved around so time was spent restoring the club and private trailers attachment and restraining arrangements.

Monday 17th.  Although the centre of  Storm Dennis continued to move away from the UK, the wind speeds at site continued to remain fresh from the WSW, with gusts around the mid 30 kts.  This combined with the continued wet state of the airfield meant another non flying day.

Tuesday 18th.  The wind speed again became the main barrier to flying, a moderate to fresh and gusty SW'ly blowing all day, with maximum gusts around 40 kts.  The airfield had dried out sufficiently to allow Ian to do some raking, but in the afternoon a heavy shower delivered another 5.6 mm of rain.  In the absence of any real flying, the simulator was used by George Rowden  to give a young visitor, Reuben,  experience of gliding via both ATing and winch launching .